2012 was the tenth warmest year on record, according to new data released by the National Oceanic and Atmospheric Administration (NOAA) and NASA.

The combined land and ocean average temperature was 0.57°C above the 20th century baseline. It was also the 36th consecutive year to track above that average. 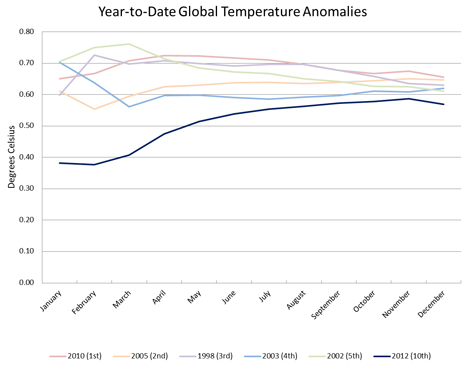 How 2012 rates against the five warmest years above the 20th century average. (Source: NOAA)

“The climate dice are now loaded. Some seasons still will be cooler than the long-term average, but the perceptive person should notice that the frequency of unusually warm extremes is increasing,” said James E. Hansen, director of NASA’s Goddard Institute for Space Studies (GISS), which monitors global surface temperatures.

“It is the extremes that have the most impact on people and other life on the planet,” added Hansen.

At the start of the year there was a La Nina ocean circulation pattern in play, which has an overall cooling effect. 2012 was the warmest La Nina year on record.

The results are released following a year of extreme weather events that have continued into 2013 with a “dome of heat” in Australia delivering record heat and exacerbating the seasonal wildfires. 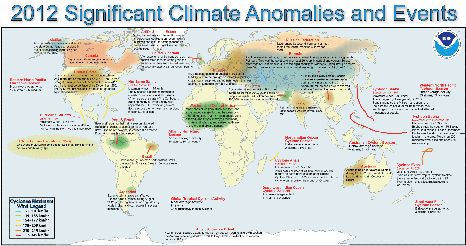