The National Ocean and Atmospheric Administration (NOAA) has charted the extreme weather events that hit the US during a record breaking year.

The NOAA’s annual report released yesterday confirmed 2012 as the warmest year on record for the lower 48 states by a clear margin. It was also the second most extreme year of weather experienced with record temperatures, droughts, wildfires and hurricanes lashing the country.

While not all of these events are directly linked to climate change, the frequency and severity of extreme weather events is increasing, an effect some have termed “loading the dice“. 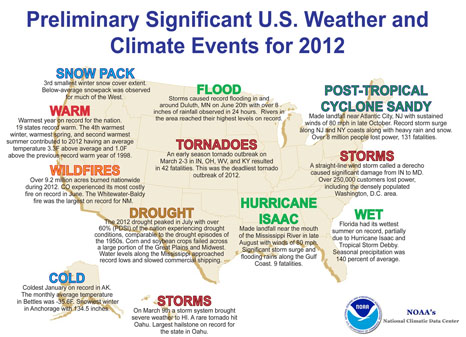 “Climate change has played a role. So has local variation, it’s impossible to determine how much each has had,” said Jake Crouch, climate scientist, NOAA’s National Climatic Data Center (NCDC).

The drought, which covered 65% of the US at its peak in July, contributed to agricultural losses of $20bn in a year that racked up $160bn of damage globally. Crouch stressed that drought conditions still prevail in parts of the US.

The drought is expected to have an impact on global food prices later in 2013.

Low snowfall also means that their will be less meltwater and so lower river levels to top up reservoirs in the Spring and early Summer.

Wildfires were also widespread with an area the size of Switzerland affected by burning.

Alaska bucked the warming trend with a local variation in the North Pacific keeping the state cool.