Why the climate needs a carbon tax in 2013

A few days ago on this website, you might have read Chevron CEO John Watson’s comment that a carbon tax would be bad for the US economy.

Unfortunately, nothing could be further from the truth. A carbon tax would have a profoundly positive impact on the US economy.

As policymakers continue to look for ways to prevent the US from heading over the “fiscal cliff”, a carbon tax stands out as a tool for reducing greenhouse gas (GHG) emissions without the need for additional government spending.

This means lower emissions without new money to pay for major projects or for new subsidies. Policymakers on both sides of the political spectrum should be happy about this.

On the right, former President Bush economic advisor Gregory Mankiw favours a carbon tax as does Nobel economic prize winner Joseph Stiglitz on the left. They are amongst the majority of economists that favour a tax, according to a 2009 survey (see below). 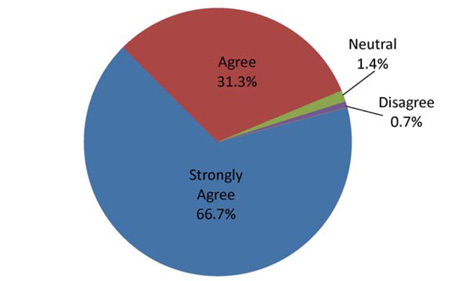 Participants were asked if placing a “price on carbon” through a tax or cap‐and‐trade system would increase incentives for energy efficiency and the development of lower carbon energy production. Source: Institute for Policy Integrity (2009)

A carbon tax can actually stimulate the US economy. Researchers at The Brookings Institution found that a carbon tax would increase US economic growth if revenues are used to reduce capital taxes.

It would also lead to higher investment and higher employment. Economists call this a double-dividend, or win-win situation.

These economic benefits are a big part of why more than ten countries around the world now have carbon taxes, or use taxes specifically to reduce GHG emissions.

In Canada, the provinces of Quebec and British Columbia have also implemented carbon taxes.

A price for innovation

For the US, a tax levied on all six major GHG emissions should be introduced at around $20 per tonne and rise steadily thereafter. This price would be stringent enough to help the US reduce its emissions without being too politically difficult.

Fortunately, there would be other economic benefits from a US carbon tax. Since companies would have to pay more for their GHG emissions, they would find new ways to reduce their pollution – leading to greater corporate innovation.

Companies would also reduce their energy consumption to save money. This would help the US achieve energy independence and protect itself from oil price shocks. Fewer oil imports are needed when energy is used more efficiently.

Another concern is that a carbon tax can negatively impact certain energy-intensive or trade-exposed sectors, such as oil & gas and steel production.

It would be reasonable to expect the government to help protect these sectors, such as by providing some support to make up for any lost profit.

However, there are good arguments that support should instead be directed at sectors less harmful to the planet as these are the types of jobs the US needs going forward.

Whether provided directly or through broad tax cuts, a carbon tax incentivizes job creation in these sectors.

It’s a shame that John Watson said that a carbon tax would be bad for the US economy when heads of other oil companies, such as Rex Tillerson, the CEO of ExxonMobil, have come out in favour of a carbon tax.

The economic benefits are there – especially the fiscal argument. Unfortunately, so too is the misinformation.

Ryan Godfrey is an Analyst at the Global Governance Institute. His latest report on why the world needs carbon taxes can be found at www.globalgovernance.eu.

RELATED VIDEO: Kjell Andersson, Policy Advisor at the World Bioenergy Association makes the case for Sweden’s ‘tax switch’ – a lowering of income tax simultaneous to the implementation of a carbon tax