High costs and a lack of policy incentives are delaying the development of large scale Carbon Capture and Storage (CCS) technologies, the International Energy Agency (IEA) has warned.

With fossil fuel consumption expected to rise in the coming decade, CCS is seen as an increasingly vital technology to ensure greenhouse gas emissions that cause global warming do not spiral out of control.

In a New Year statement the IEA says that a “significant deployment of CCS” must be seen during the 2020s to avoid breaking the 2°C warming target on pre-industrial levels.

“Fossil-fuel CCS is particularly important in a world that currently shows absolutely no sign of scaling down its fossil fuel consumption.” 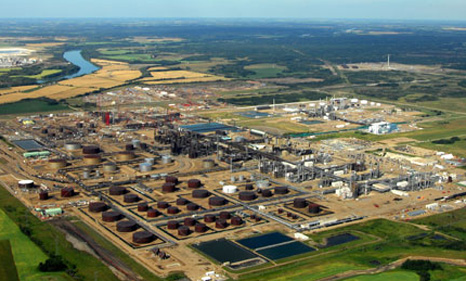 Shell’s Quest CCS project has received $865 million in funding from the governments of Alberta and Canada – they say it will capture, transport and store over a million tonnes of CO2 a year by 2015

Oil, gas and coal met 81% of global energy consumption in 2009, and 85% of the increase in global demand over the last decade.

This shows little sign of dipping, and the rate of investment in new coal power stations is a particular concern for many analysts, with India and China opening around three new plants every week.

Without any abatement the levels of CO2 these will produce could render efforts to cut global emissions hopeless.

The latest Climate Action Tracker report underlines these concerns, revealing that given current energy policies the world is currently on path for warming of 3°C by 2040, 1°C above the level scientists believe is safe.

While the essentials of CCS technology are well understood, translating these into a commercial scale project has proved slower than many anticipated.

Shell is building a billion-dollar CCS project linked to oil sands production in Alberta, but electricity producers are wary of investing heavily in the technology given high capital costs and reduced flexibility once it is in place.

With no global price for carbon, incentives for the private sector to invest are limited, although anyone who manages to make the technology work on a commercial basis is likely to be well rewarded.

Brad Page from the Global CCS Institute told RTCC it is $50-100 per Mega-Watt hour more expensive to run a power plant with CCS, but he argues this will decrease as the technology improves.

Conversely, James Smith from the UK Carbon trust points out that CCS could cut the cost of meeting the UK’s annual carbon targets by up to 1% of GDP by 2050 – that’s £42 billion a year.

Currently Page says there are eight major plants in operation around the world, storing 23 million tonnes of CO2 per year. He hopes this could rise to 35 million by 2015.

To put that in context, the UK’s power stations emitted 196 million tonnes of CO2 in 2010.

Large scale CCS projects are underway in the USA and Canada, while Norway and China are both piloting projects, but investment appears to have slowed to a crawl in the EU.

Ahead of Christmas the European Commission awarded over €1.2 billion to 23 ‘innovative renewable energy demonstration projects’, none of which were CCS projects.

Chris Littlecott from environmental consultants E3G calls this “hugely embarrassing for European efforts to address climate change”, exposing the chronic lack of investment in EU CCS schemes in an article for the Energydesk website.

Projects in France, Romania, Italy, the Netherlands and the UK are either behind schedule or have been cancelled.

The IEA plans to release an updated version of its CCS technology roadmap later this year, and says governments must as a priority in 2013 assess the role it will play in their long term energy plans, and ensure potential storage sites are approved well in advance.

Page remains bullish about the prospects for CCS, but admits it’s unlikely the world will witness 130 in operation by 2020, the number his organisation believes is necessary to avert dangerous global warming.

“I think you’ll see by 2015 16 plants, we’re probably on track for 20 by 2020 which is a pretty serious achievement and something many governments have talked about as their objective,” he said.

“And we’ll see the cost continually coming down. So I’d say by 2030 we’ll be in a cost competitive situation, and we’ll need this, frankly 2°C is almost impossible to achieve if we don’t start dealing with the emissions from fossil fuels.”

RELATED VIDEO: Global CCS Institute Bruce Page says the technology is vital, but should not be used as an excuse to burn more fossil fuels