The intense heat afflicting Australia continent has led to the country’s meteorologists adding new colours to take its temperature range to 54°C.

The Bureau of Meteorology added pink and purple to their chart, which previously finished at 50°C.

Monday’s nationwide average of 40.33°C was the hottest since records began over a century ago – and led to the outbreak of more than 100 wildfires along the east coast.

It is currently impossible to pin a particular weather event on climate change, but the IPCC’s Fourth Assessment report in 2007 suggested the continent can expect rising temperatures and increased incidences of wildfire and drought. 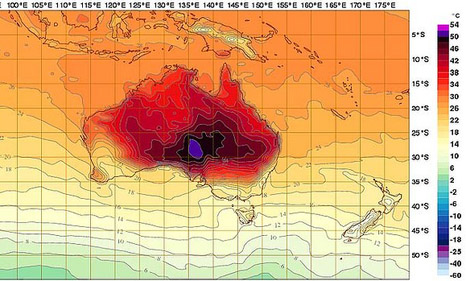 A ‘dome of heat’ is currently sitting above Australia, driving up temperatures (Source: Bureau of Meteorology)

Dr David Jones from the Bureau of Meteorology told ABC news temperatures were likely to increase this week.

“Our guiders are suggesting we may beat yesterday’s record by another 0.1 or 0.2 of a degree. The other record that we’ll be watching is a run of very hot days,” he said.

“We’d only ever seen four days of 39 degrees or above consecutively. We’ve now seen six, and we’ll almost certainly see seven, and perhaps even eight.

“So, this event is now going beyond anything in our record books.”

RELATED VIDEO: Sam Johnston tells RTCC about new Australian Government initiative using local knowledge and skills to prevent wildfire outbreaks, which are responsible for up to 10% of global carbon emissions