The Philippines’ chief climate negotiator has called on world leaders who are ambivalent to the dangers of climate change to witness the devastation left by Typhoon Bopha.

The Category 5 storm ripped through the southern island of Mindanao just before Christmas, leaving in its wake thousands dead and a trail of destruction likely to exceed $1 billion.

The human cost is ten times that of Hurricane Sandy, which hit the US east coast in October. Fresh from a visit to the affected areas, Naderev ‘Yeb’ Sano told RTCC it was a brutal reminder why climate change must be addressed.

“I am a firm believer of how experiences can mould our world view, and leaders who can see reality can do a lot of things in this process, and I am also aware there are two kinds of people. People who acknowledge reality and people who fail to do so,” said. 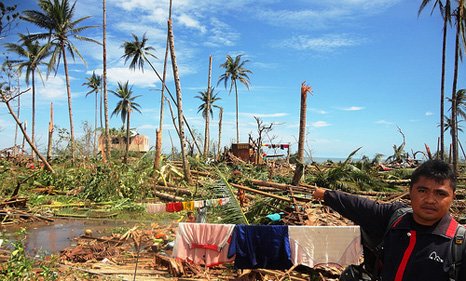 Nearly one million survivors in the Philippines are currently relying on national and international aid agencies for shelter and food, and Sano says it may be months before they know the true scale of the disaster.

“The typhoon cost a lot of deaths and we stopped counting at 1041, because those were the bodies we could recover, but 850 are missing so it’s easily close to 2000 in terms of lives lost,” he said. “This is so much more than the other typhoons we have seen in the last decade.

“The experience visiting the typhoon ravaged areas in the southern Philippines was very sobering – it was very disconcerting to see so many people suffering three weeks after the disaster hit. There are still a lot of issues with regard to the future of the people there, shelter is a key concern.

It is currently impossible to pin a particular weather event on climate change, but scientists believe a warmer atmosphere can absorb greater quantities of water, which will result in more extreme and unpredictable weather events.

In the Philippines’ case Typhoons are expected between June-October every year. Monsters blowing 135mph winds in December are not.

Bopha was the latest in a worrying sequence of storms to make landfall. In 2009 Typhoon Ketsana killed 789 and caused $6.2 billion worth of damage, 2.5% of the country’s GDP, while in 2011 Tropical Storm Washi hit Mindanao, that time killing 1,600.

“We have an average of 19-20 tropical storms of various intensity every year,” Sano said, “But what we have seen in the past half century is more intense storms out of that number.

“The unpredictability of their paths has increased together with storms that bring a lot of rain.”

Sano admits that in the case of the Philippines, deforestation and the inappropriate location of housing has in certain cases made the country less resilient to extreme conditions.

His department are working on building adaptation capacities across the most affected areas, and for good reason.

The Philippines was recently rated by Germanwatch as one of five countries at risk from climate change, while analysts Maplecroft rate the capital Manila as the world’s second most vulnerable city to extreme weather.

If severe storms continue to hit the Philippines their impacts are unlikely to just be felt in the region.

Southeast Asia is a key cog of the global manufacturing supply chain, producing vast quantities of cars, computers and clothes for a Western market with a voracious appetite for cheap goods.

As the climate risks in these regions rise, their viability could come under increasing scrutiny, as will the costs associated with their products.

“As global corporations expand into the emerging growth markets, their operations and supply chains will become exposed to a complex set of climate risks that have the potential to disrupt business continuity,” said Maplecroft’s Helen Hodge

Bopha struck while Sano was engaged in the UN climate talks in Doha, leading him to make an emotional plea to delegates reminding them what was at stake for his country.

Addressing the main gathering he said: “I am making an urgent appeal, not as a negotiator, not as a leader of my delegation, but as a Filipino. I appeal to the whole world, I appeal to leaders from all over the world, to open our eyes to the stark reality that we face.”

Despite claims that progress was made in Doha, it was clear to all taking part that the current levels of ‘climate ambition’ are woefully insufficient to prevent the world warming beyond 2°C.

For Sano, financing the Green Climate Fund and increasing the levels of emission pledges under the Kyoto Protocol are a priority for the start of 2013.

“For the Durban Platform [2015 negotiating track] to start work effectively it is linked to amendments to the Kyoto Protocol as well as to finance – those two are essential to the Philippines and the process,” he said.

“It will also be crucial for the issue of loss and damage to evolve beyond a mechanism that is being explored.

“We need to see developing countries to stand solidly behind this concept and pursue it with strength in the negotiations to ensure that it becomes established.

“We need to ensure loss and damage is not relegated to the subject of a talk shop again in the next twelve months.”

There is no danger of that happening in the Philippines. The dangers and consequences of ignoring climate change are all too real.