Last year’s natural disaster racked up an estimated $160bn worth of damages, according to the world’s largest reinsurance firm Munich Re.

Hurricane Sandy was the single costliest event at $50bn in what was a fairly mild year for the insurance industry. Losses in 2011 were $400bn.

While it is hard to directly link one specific event to climate change, rising sea levels exacerbated the effects of Sandy’s flooding. Water in the East Coast’s harbours is 15 inches higher than in 1880 and warmer air and sea temperatures encourage greater storminess and so extreme weather. 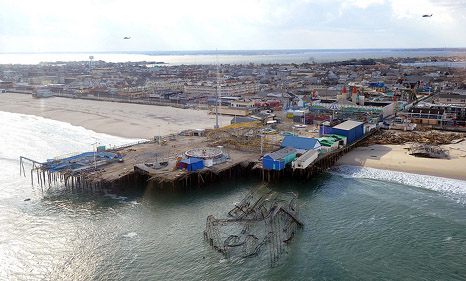 Flooding from Hurricane Sandy’s storm surge stretched hundreds of kilometres along the east coast of the US. (Source: Flickr/Jim.Greenhill)

“The heavy losses caused by weather-related natural catastrophes in the USA showed that greater loss-prevention efforts are needed,” said Torsten Jeworrek, Munich Re board member.

“It would certainly be possible to protect conurbations like New York better from the effects of storm surges. Such action would make economic sense and insurers could also reflect the reduced exposure in their pricing.”

There are calls for great levels of financial support for climate adaptation from the private sector. Reducing emissions provides more obvious routes to making money from climate change investment leaving preparedness and risk reduction further down the priority list.

The US also witnessed a drought only beaten for severity by the Dust Bowl years of the 1930s.

Total agricultural losses were $20bn with the additional human costs expected later this year as the knock on effect of high food prices takes hold.

Preparing farmers for climate change in both the developed and the developing worlds is one of the core strategies to protect food security as weather patterns become increasingly variable.

“The [developing world] farmers are on the forefront of climate change and are very worried about the outcomes for their farms and livelihoods,” said Bruce Campbell, director of Climate Change, Agriculture and Food Security (CCAFS) program at the CGIAR agricultural research consortium.

“Farmers are actively trying to counter climate-induced problems – for example by diversifying, changing planting dates, and switching to less susceptible crops or livestock. However, their options are often limited because of weak markets, lack of advice and lack of policy support,” Campbell told RTCC.

While better information can help farmers to make the right choices, Campbell believes there is role for financial mechanisms to support developing country farmers.

“There are some very promising innovations. One of these is index-based insurance – millions of farmers are now covered by these schemes in India and there are smaller schemes in many countries in Africa. Insurance protects farm and livelihood assets – if extreme events eat into assets then it is a downward spiral for livelihoods,” he said.

A potential new regime of climate finance was initiated at the UN climate change talks in Doha. Loss and damage would come into play after adaptation efforts have failed.

Although still very much in the early stages, it is thought that those countries with a historical responsibility for climate change would contribute to a fund to absorb some of the losses felt in developing nations.

Based on the figures released by Munich Re, loss and damage costs far outstrip the recent climate finance payments of around $10bn a year.