Last year was the second wettest year on record for the UK, according to the national forecaster the Met Office.

2012 was the wettest twelve months yet for England, which along with the rest of the UK also experienced a drought at the start of the year.

Met Office rainfall data stretches back to 1910, but four of the five wettest years have occurred since 2000.

The forecaster also reports that ‘extreme’ incidences of rainfall are becoming more frequent, a trend that is being observed around the world, notably in India and China.

Increasing global temperatures may be a factor. The world has warmed by 0.7°C since pre-industrial times, and a warmer atmosphere can carry more moisture – some estimate there has been a 4% increase in water in the atmosphere.

“It’s essential we look at how this may impact our rainfall patterns going forward over the next decade and beyond, so we can advise on the frequency of extreme weather in the future and the potential for more surface and river flooding,” Met Office Chief Scientist Professor Julia Slingo said.

“This will help inform decision-making about the need for future resilience both here in the UK and globally.” 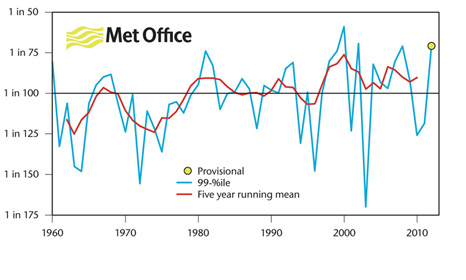 The above graphic shows the frequency of what climate averages tell us should be roughly 1 in 100 day heavy rainfall events in each year. Over time, this gives a view of the frequency of ‘extreme’ rainfall. (Source: UK Met Office)