Central West Antarctica is one of the fastest-warming regions globally say US researchers who have published their analysis in the journal Nature Geoscience.

The study used temperature recordings from the Byrd weather Station, built by the USA in the 1950s and located near the centre of West Antarctica.

They report a marked increase of 4.3 degrees Fahrenheit (2.4 degrees Celsius) in average annual temperature in the region since 1958, three times faster than the average rise around the globe.

The study is significant as melting from the West Antarctic Ice Sheet (WAIS) is estimated to contribute 0.3 mm to sea level rise each year – second only to Greenland, whose contribution has been estimated as high as 0.7 mm per year. 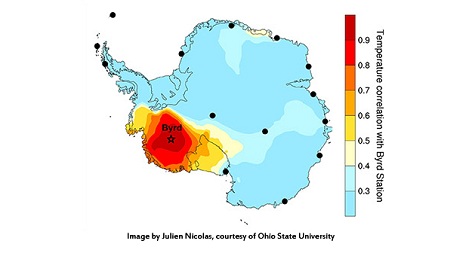 A map produced by the study’s authors suggests temperatures are especially high in the area around Byrd Station (Source: Nature Geoscience)

“Our record suggests that continued summer warming in West Antarctica could upset the surface mass balance of the ice sheet, so that the region could make an even bigger contribution to sea level rise than it already does,” said David Bromwich, senior research scientist at the Byrd Polar Research Center.

“Even without generating significant mass loss directly, surface melting on the WAIS could contribute to sea level indirectly, by weakening the West Antarctic ice shelves that restrain the region’s natural ice flow into the ocean.”

Previously scientists were unable to effectively use data from the Byrd Station as it was incomplete, but researchers say they used a computer model and ‘numerical analysis method’ to fill in the gaps.

Scientists believe the WAIS is especially sensitive to warming oceans as the base of the sheet is below sea level.

“We’ve already seen enhanced surface melting contribute to the breakup of the Antarctic’s Larsen B Ice Shelf, where glaciers at the edge discharged massive sections of ice into the ocean that contributed to sea level rise,” said David Monaghan, who co-authored the report.

“The stakes would be much higher if a similar event occurred to an ice shelf restraining one of the enormous WAIS glaciers.”

The warming takes place during the southern hemisphere’s summer months, with the report warning that a continued rise in summer temperatures could lead to more frequent and extensive episodes of surface melting of the West Antarctic Ice Sheet.