Two days after Sandy hit Atlantic City and devastated New York City, I was on British television being asked how I ‘predicted Sandy’. My book, published one week earlier, described just such a storm at that location.

I confessed that I was as stunned as anyone that it unfolded to my script.

The point of that page was to explain a peculiar vulnerability for New York City, and to contrast it with Miami. Often those two cities are cited as having similar vulnerability. Two coastal locations could not be more different. It was a teaching opportunity. We all should seize them.

“Sandy” got the attention of millions with its coastal devastation.

While few came away from that event separating long-term sea level rise from storm surge, extreme tides, and geologic vulnerability, there are signs that it did improve the receptivity to reality.

Hopefully 2013 is finally the time to shed some light on rising sea level and the absolutely certain catastrophe that lies ahead.

While rising sea level is part of the larger climate change issue, it deserves to be singled out since the coastline is such an important geographic boundary. As sea level rises and the coast moves inland it will destroy property, infrastructure, and communities.

For each foot of vertical rise the shore can move hundreds, even thousands of feet inland. Rich or poor, people quickly pay attention to the permanent destruction of coastal real estate.

The magnitude of long-term sea level change stuns people. When properly explained it makes such sense that there is no where to hide from the new reality. This graphic by Dr James Hansen is one that I particularly like. 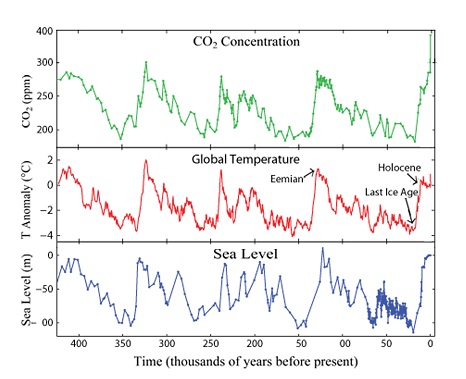 It illustrates many key points, even to those who avoid science:

• Sea level, global temperature, and carbon dioxide levels move in synchronization. There was a natural pattern of approximately 100,000 years, long before human impact.

• Following that, the ocean rose for 14,000 years, then leveled off for roughly the last 6,000 – a period that happens to coincide with our written history and rise of civilization.

Up until a century ago, there were signs that the usual pattern would continue, beginning the 80,000 year cooling period with expanding ice sheets and falling sea level.

• Two centuries of amazing industrial growth and exploding population coincide with CO2 levels that have jumped 40% higher than the 180 – 280 parts per million (ppm). The vertical line at the far right of the top graph is approaching 400 ppm.

• Though there is a lag time for the oceans to warm, the ice sheets to melt, and sea level to rise, the measurements are now confirming expectations. Over the last century global average ocean temperatures are roughly 0.8 degrees C (1.5 degrees F) warmer. The ocean is approximately 20 cm (8 inches) higher too. Those trends are accelerating.

From these few bullet points, a clear truth emerges: While climate has changed in the past according to natural cycles, we have not just accelerated the change, we have changed the cycle.

What gives the issue of rising sea level near-term impact is that coastal property values and similar assets inevitably will soon begin to be discounted or amortized recognizing that they have a finite life.

We need to separate storm surge from sea level. Storm surge is a probability event for any location within any particular timeframe. It may or may not happen.

1. Sea level will rise, eventually by tens of feet. It is as simple as warmer temperatures, melting the two great ice sheets — Greenland and Antarctica. Ice melts at 32 F / Zero C, no matter what your political beliefs.

2. We need to begin to adapt to rising sea level and a coastline that is moving inland for the first time in six thousand years. Everything in our cultural history makes us want to disbelieve that the future world will be physically different. in this new reality there will be economic losses, as well as opportunities.

3. We should try to slow the rate of rise, which very slowly follows the level of greenhouse gases. It will be how future generations remember. It is a moral issue since we have the knowledge to see how we will cause irreparable harm to others.

Superstorm Sandy has increased our teaching opportunities. No doubt there will be more. We all must seize them. No need to exaggerate or be alarmist as the conservative truth is alarming enough.

I find that a calm matter of fact tone can be quite persuasive.

John Englander is a consultant, and lecturer on climate change and ocean impacts and the author of High Tide On Main Street