Hope you are well and climate change has not yet destroyed your snowy home and made you change from that nice blue fur coat into a pair of shorts and a tee.

I am a big girl, so I am not supposed to be making New Year wishes, and I haven’t in quite a while. But this one is a special occasion.

Surely, you of all people, both real and imaginary, know how bizarre Russia is. I mean, like, BIZARRE. I often feel someone should call the editors of Oxford English Dictionary and insist on putting Russia in as the definition of the word.

So, Dedushka, get this – when it comes to climate talks, Russia is bizarre times infinity. There might be no other country that has this incredible skill of doing a press conference and thus increasing net confusion. Ahead of Doha, I decided to count all people who told me their country’s delegates have absolutely no idea what Russia has on its mind, but gave up at around 30. 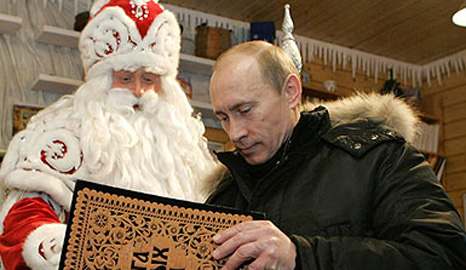 I have been complaining about that for a while, I must confess, so let me just cut to the chase and make a wish. My delegation to the UN climate talks is in a desperate need of a makeover. For that matter, our entire climate policy is.

As a step zero for distinguished delegates, I would suggest taking the winter break time (we Russians have eight days off for New Year) to seriously consider the words you’ve all been saying and writing. Just take off your climate delegate tinfoil hat and think about their meaning.

Our beloved homeland WILL suffer from the consequences of climate change. Russia NEEDS to increase energy efficiency and cut emissions. You might just use all these things as rhetoric devices, but they are very true and very real.

They are real, but are you? I don’t know about other countries, but most of those involved in ‘Russian climate policy’ have a scientific background, so they must be very well aware of what science and economics have to say on the matter.

Could all of you possibly consider acting upon your knowledge?

Step one, then: we need to stop shooting ourselves in the foot by suddenly backing away from emissions reduction pledges that are already bordering on easy-peasy. Or at least we need to familiarize ourselves with the concept of good and bad timing and stop doing things like that right in the middle of discussions on raising ambition.

Step two: invest in more negotiators. You need that because He-Who-Must-Not-Be-Named cannot continue to manage all this on his own like a diabolical puppeteer. Ditch the few tourists you have and bring some brilliant students from MGIMO, the diplomatic university in Moscow. Make them shadow you and report on meetings and decisions – I don’t have to tell you this, you know the drill.

Step three: we need to stop treating the whole process like a yes/no questionnaire where one only has to agree or disagree with sets of brackets that somehow concern them. For instance, what’s the Russian position on loss and damage? Response measures? Shared vision? Equity? Review? Finance roadmap? Or does Russia just play Angry Birds all the way through those critical discussions? Anyone?

I am a big believer in baby steps, and these particular ones may prove to be the birth of a truly different Party in the talks. The one that does not necessarily have to be run over in the dash for The Package.

As the Russian NGO newsletter puts it, the 15-25% pledge stunt looked like a clumsy and desperate attempt at showing that the country has a climate policy – which they don’t. This, of course, rather blew up in their faces, but you know what? It didn’t have to.

Sometimes when an important historic building in a Russian city is being restored, they put up this “screen” with the building’s old facade drawn on it. That way all the drunk construction workers and splashes of cheap paint all over 19-century windows are hidden away from the rest of the world until everything is fixed – or possibly forever.

So you don’t have a climate policy. You’re not warm and fuzzy. You can own that. Say it out loud (although preferably off the record and without any observers in sight). The real facade is a mess, so hire someone skilled and cynical enough to draw a fake one. What do you think others are doing here?

The Russian delegation might also be the only one that has an office but does not have a press officer. Media matters are handled by a few very nice people who are, nevertheless, not nearly as skilled or cynical (and, I mean, we’re talking ‘clubbing a baby seal’ cynical here, because that’s the level of detachment required to continuously deal with a cargo cult and stay sane).

Dr Bedritsky, head of the delegation, likes to tell me that I am too much of a critic and should praise Russia more often. Well, here’s an idea – show me reasons to do that. In fact, brag about them. Some of the things you say and do, oddly, make a lot of sense, but you apparently prefer to avoid mentioning them at all costs.

So you’re Chaotic Neutral (any other AD&D geeks out there?) – again, own it and make the most of it. Get someone to do the dirty job of maintaining a less disturbing appearance and feel free to go on doing your own jobs.

(And if that includes clubbing baby seals, so be it – maybe your media officer will tell everyone it was in fact a very nasty mutant carnivorous climate-change-denying baby seal which had previously devoured a kitten. Or a puppy – you decide)

So, Dedushka, I guess, if you could please make my country jump off their fence and either live up to the rhetoric or embrace chaos in style – that would be, indeed, a happier New Year.

Yours in a changing climate,