Following an unspectacular conclusion to the Doha climate talks, Sophia McNab of the UK Youth Climate Coalition (UKYCC) runs through her experiences at the UN negotiations as exhaustion, frustration, anger and sadness took hold.

On the day the negotiations were supposed to finish, most of us in YOUNGO stayed the night in the convention centre. Friday and Saturday blurred into one exhausting and ultimately desperately sad day.

As a delegation, we have been supporting each other as we deal with a sense of loss and the end of this chapter. We had a debrief follow the talks in the courtyard of our hostel, but in general decided not to talk too much about the UN during our final days here.

Yet here I am, trying to write this blog. It’s not easy to stop thinking about something that you’ve been obsessing over for the past few months.

The ‘Doha Gateway’, as the agreement is named, contains no new targets to reduce emissions, no finance commitments and a weak compromise on loss and damage.

After 12 hours waiting on Saturday, the President gaveled through the five texts that make up the Doha work plan. The plenary erupted into clapping and whooping. At the back of the room, young people looked at each other in disbelief. 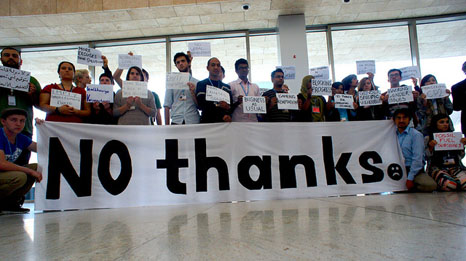 In the space of one minute, the business of COP18 had been concluded. Backroom negotiating dominated the proceedings and left no room for transparent and inclusive debate. Furthermore, the deal was a betrayal of young people and developing countries.

How could these negotiators celebrate such a meaningless deal? How had could they have lost perspective so completely?

It is this self-congratulatory rhetoric which is particularly difficult to swallow. In the words of the Nauru negotiator – this was process for the sake of process. For many of us in YOUNGO, no text would have been preferable to a weak text.

This empty and meaningless agreement allows politicians across the world to claim that COP18 was a successful transition to a ‘new global climate regime’. It avoids any confrontation with the failures of the process and diffuses a lot of media attention. As it is, I fear COP18 will drift quietly into COP19.

An hour of speeches followed the President’s gaveling, in which countries expressed their reactions to the text.

YOUNGO-ers were now exhausted and thin on the ground as many had gone to catch their flights home. Nonetheless, we rallied around one last action to catch the negotiators as they were leaving. We shouted in unison for half an hour, but most of the negotiators had already slipped out of the building. It was more an act of catharsis – venting our anger, sadness, frustration, exhaustion…

‘Climate justice. Not here. Not now. Shame on you. We reject this text. We condemn this deal.’

The UK youth delegation had low expectations for this conference but, for me at least, I couldn’t prepare myself for the moment when narrow self-interest prevailed above decency and common compassion. How could the collective energy of all these people, all this time, all this money lead to nothing? How could the impacts of Typhoon Bopha have been ignored?

Do the developed country negotiators feel shame? I doubt it. Ed Davey, Secretary for Energy and Climate Change, refuted [UKYCC members] Camilla and Fatima’s claim that he had betrayed future generations when they confronted him outside the plenary. I hope I never get wrapped up in the language ‘political feasibility’ or lose sight of the difference between what is ‘realistic’ and what is morally right.

As a team, the UK youth delegation has scheduled more skype calls (of course) and a weekend gathering in January. Some of us are more ready to think about the next step than others. I hope I can share my sadness and frustration at the UNFCCC with my friends and family at home in a way that makes them ask new questions.

I will continue to think about Yeb Sano’s emotional intervention and what it means to fight for those on the front-line of climate change.

‘I am making an urgent appeal… please, no more delays, no more excuses. Please let Doha be remembered as the place where we found the political will to turn things around. Please let 2012 be remembered as the year when the world found the courage to take responsibility for the future we want. I ask all of us here; if not us, then WHO? If not now, then WHEN? If not here, then WHERE?’