The EU will significantly increase its climate change targets, according to the UK’s Secretary of State for Energy and Climate Change Ed Davey.

Addressing a committee of MPs for an official review of the Doha round of UN talks, Davey said the UK’s energy strategy was predicated on the EU target to reduce carbon emissions by 20% by 2020 compared to 1990 levels, being revised upwards to at least 30%.

“We are working on the assumption that the EU will increase its emission targets, the coalition agreement says we will push for 30% and there are already proposals on the table that will get Europe very close to that 30% target,” said Davey. 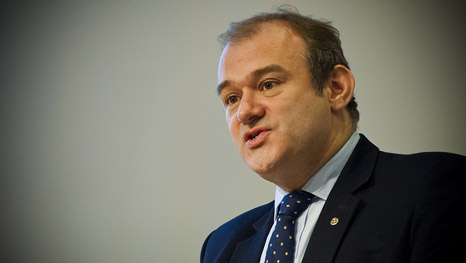 UK Secretary of State for Energy and Climate Change Ed Davey is fully expecting an increase in ambition from the EU. (Source: Flickr/Combined Heat & Power Association)

“The EU has met its 20% target, the energy efficiency directive is legally binding and meets we will exceed that, the possibility of reforms in the EU ETS would get us pretty close to 30% as well as other work on Hydrofluorocarbons (HFCs) that would increase the EU ambition,” he told a panel of MPs yesterday.

The likely timing of this increase would appear to be 2014 when the second commitment period (CP2) of the Kyoto Protocol, signed in Doha earlier this month, will undergo a review. This clause allows those signing up to legally binding cuts to increase their commitments.

“The EU and others discussed this review clause so I don’t know what the final [EU] emission reductions will be but I would hope we will be able to raise those levels significantly by 2014,” said Davey.

“We’re still committed to 20% but we were also keen on a review, sometimes referred to in the talks as a ‘ratchet up clause’ in 2014. Some countries, the vulnerable small island states in particular were concerned that an eight-year commitment period at the current levels of ambition would mean those low levels of emission reductions would be locked in.”

Davey also said that while it would have been ideal to have seen more countries involved in the new round of the Kyoto Protocol, it is vital that the system has been maintained, even at the cost of lower climate ambition.

“Clearly we would have liked more [participation] and there are some notable issues. But we didn’t go to Doha thinking there would be a range of new countries to join CP2, the aim was keeping a regime that has rules, measurements and processes, alive,” said Davey.

“That is quite important as we negotiate the 2015 deal. We need to make sure those rules continue so we get some benefit from it and so that it is the model for the new regime. The critical thing for the new regime is that it applies to all countries.”