From the moment President Obama mentioned climate change in his election victory speech, the Administration has been under additional scrutiny.

The US delegation at the UN climate change talks in Doha was closely watched as people looked of resigns of a change in tactics from a traditional source of resistance at the negotiations.

Despite many observing that it would take a while for the new look administration to take shape and for any policy shift to filter down, there was a palpable sense of disappointment.

This week, the first big name change in the Obama administration is expected with long time climate hawk and former Presidential candidate John Kerry expected to be announced as Hillary Clinton’s replacement as Secretary of State.

Kerry has been outspoken on climate change throughout Obama’s first term and would likely place the issue near the top of his foreign policy agenda.

RTCC runs through some of his previous interventions on climate change during President Obama’s first term. 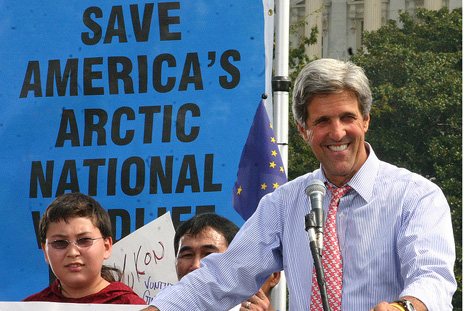 Senator John Kerry is set to be announced as President Obama’s Secretary of State, a move which could please environmental campaigners. (Source: Flickr/dbking)

“Climate change and our dependence on foreign oil are a threat to our national security. There’s nothing conservative about remaining indebted to hostile regimes for our energy. It’s time for the Senate to lead and – with an eye toward our best traditions – find common ground to move the country forward, keep our country safe and strong, and lay the groundwork for decades of economic growth to come.”

“Clearly, the impacts of climate change threaten the stability of our development strategies. It’s time we craft a path forward where our development and climate goals are mutually reinforcing.”

“We are living through a story of disgraceful denial, back-pedaling and delay that has brought us perilously close to a climate change catastrophe. We should be compelled to fight today’s insidious conspiracy of silence on climate change—a silence that empowers misinformation and mythology to grow where science and truth should prevail. It is a conspiracy that has not just stalled, but demonized any constructive effort to put America in a position to lead the world on this issue.”

On the severity of climate change:

“I believe that the situation we face, Mr. President, is as dangerous as any of the sort of real crises that we talk about. Today we had a hearing in the Foreign Relations Committee on the subject of Syria, and we all know what’s happening with respect to Iran, and nuclear weapons and the possibility even of a war.

“Well, this issue actually is of as significant a level of importance, because it affects life itself on the planet. Because it affects ecosystems on which the oceans and the land depend for the relationship of the warmth of our earth and the amount of moisture that there is and all of the interactions that occur as a consequence of our climate.”

In the end, the question is not whether we’re going to pay for climate change. We’re already paying for it. The real question is whether we walk a path that addresses it now in a responsible way and that also helps us break humanity’s addiction to oil, cleans up our environment and creates jobs — or whether we suffer the consequences later on a massive, unpredictable scale in the form of environmental devastation, conflict, famine, poverty and reduced economic growth for decades to come.

“You have to be all of the above. Look, I’m the most ardent advocate up here for doing something about climate change, but you’re nevertheless gonna have to use fossil fuels…There are ways to do fossil fuels responsibly. And if we don’t do that, it’s gonna be catastrophic.”

VIDEO: John Kerry urges US action on climate change ahead of Rio+20