Nearly a week after the Doha climate talks concluded with an outcome that did not leave Russia particularly happy, the country’s delegation and RIA Novosti organized a press briefing on Thursday around the two questions everyone’s been asking – what exactly happened and where do we go from here?

Dr Alexander Bedritsky, Russia’s climate change envoy, started by expressing general disappointment at the talks, saying they did little for the climate and some of the LCA issues, such as various approaches and new market and non-market mechanisms, could have been given more attention.

“I see no grounds to consider Doha a success”, he said, noting that the only positive movement he did see was in the Durban platform group, which managed to adopt a general timetable for the next three years.

Oleg Shamanov, the Russian Ministry of Foreign Affairs official who was actually there on Saturday evening to object to steamrolling the package, added that the conference turned out to be extremely “one-sided” – achieving little more than purely procedural goals and cutting down on the number of working groups, not Greenhouse Gas emissions. 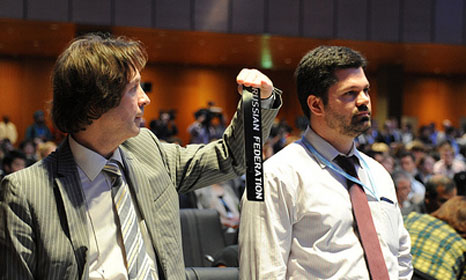 Both then went on to express their grave concern about the growing level of ‘legal nihilism’ in the talks.

It turns out (somewhat suddenly, because this has been barely mentioned before) that Russia is extremely unhappy with the 20 years of inability to adopt the rules of procedure, did not like the way things went down in 2010 in Cancun and believes that the whole Doha incident has to be viewed in a broader UN context.

“Conference of the Parties is, without doubt, on a slippery slope of using methods of work that are in no way compatible with the agreed UN norms and negotiating practice”, said Shamanov.

He also gave a rather thorough account of what actually happened, in Russia’s view. According to Shamanov, Russia, Belarus and Ukraine were asked by Qatar to prepare a compromise proposal on the issues at stake, but that proposal was ultimately “just put in the (presidency’s) pocket and ignored”.

Russia raised a point of order immediately when it became clear that the decisions were about to be adopted, and Ukraine also requested the floor – so it wasn’t just banging the table with a nameplate, it appears.

“The situation this time is very different because, in effect, three countries, not just Russia, were ignored. It was proudly announced that decisions were adopted by consensus, but what sort of consensus is that?”, Shamanov told the media.

Bedritsky noted that Russia, while adamant about not joining KP2, still cared about the agreement it, unlike Canada, does not intend to leave. The country cannot support messing with Kyoto rules before the first commitment period is officially over, which does not happen before 2014-2015.

What we did not support is the very notion of rules being abruptly changed and countries being let down on their expectations”, said Bedritsky.

As for the way forward, Bedritsky once again gracefully dodged the question on when Russia’s national 2020 goal might be formally adopted and what number we might see there.

He did, however, state that in his personal opinion, a national target should probably be a single number and not a range – possibly hinting at his own position in the ongoing debate.

During the first week of the talks, Deputy Prime Minister Dvorkovich told RIA Novosti in Moscow that discussions on the national goal and the country’s now-useless Joint Implementation infrastructure would continue after Doha.

There seems to be no news on this front yet, but it is expected that the final weeks of 2012 – and Kyoto commitments for Russia – may eventually bring everyone some closure.