There were no signs of President Obama’s renewed focus on climate change at the UN negotiations in Doha with a US position virtually identical to previous years.

The talks finished a day late on Saturday evening with a resolution, the Doha Climate Gateway, regarded by most as weak but necessary and the US a key player in driving the deal to the lowest common denominator.

After President Obama highlighted the climate crisis in his victory speech, and the onslaught of Superstorm Sandy on the Eastern Seaboard, there was an expectation in Doha that a new era of urgency would be visible in the US delegation.

Instead there was a more familiar feel with US was singled out for criticism on numerous occasions. It held up progress on the few remaining issues to be settled in the early hours of Saturday morning as an additional session later that day became necessary. 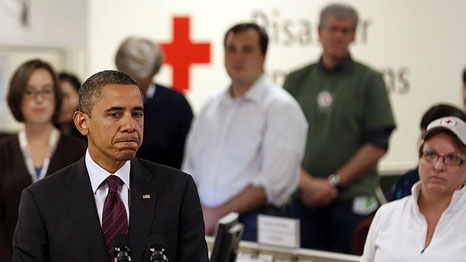 Its opposition to a new loss and damage programme to help countries to recover from climate change impacts also proved contentious with one negotiator seen leaving a late night showdown between the US and the Alliance of Small Island States in tears.

“I think what we saw from the US in Doha was a mixed performance. On the one hand, the US was a major impediment in the climate finance negotiations, refusing to give developing countries the reassurance they’re seeking,” said Alden Meyer, director of strategy and policy for the Union of Concerned Scientists.

“The US and other developed countries are really committed to ramping-up support for climate mitigation and adaptation from the current $10 billion a year towards the $100 billion a year by 2020 that was promised in Copenhagen. The US also was adamant that it could not even consider increasing the ambition of its 2020 emissions reduction pledge.”

The US has said it will cut its greenhouse gas emissions by 17% by 2020 compared to 2005 levels. US special envoy for climate change Todd Stern was singled out for criticism after citing a report that said current US policies had it on track for 16.5% reductions. The report actually referred only to carbon dioxide levels, not to any of the other gases.

Stern said after the deal had been done that with no big ticket deal to be signed in the new Durban Platform track of the negotiations, which aims to establish a global emissions reduction deal by 2015, the talks would always be low key.

“This was supposed to be a transitional year and that is what it was. No one expected big deliverable on the Durban Platform that was the nature of this COP [meeting]. I’m not shocked that it still turned out to be contentious. They always are,” said Stern.

There was some early glimmers of a change in position next year with the issue of equity, how to find a fair deal for rich and poor nations, firmly in Stern’s sights. When negotiating the new global deal, the so-called Durban Platform, last year Stern was heard to say “if equity is in, we’re out”.

“There should be time and space to have serious discussion this year about how to understand equity and CBDR in the new world that we are trying to negotiate for. The reason I welcome this conversation is because it is clearly going to be at the heart of the Durban Platform,” Stern said at the conclusion of the Doha talks, potentially suggesting a softening stance.

Stern and his right hand man Jonathan Pershing came under fire from their fellow negotiators as well NGOs for who this minor concession was not nearly enough.

Greenpeace Executive Director Kumi Naidoo said it was time the US shook things up at the UN talks.

“We must remind ourselves that for eight years under President Bush the US held back these climate talks, eight years we couldn’t afford to lose. We were happy to hear him mention climate change in his acceptance speech but the reality is that both the US negotiators have been a stumbling block to this process consistently in the past few years,” said Naidoo.

“I would suggest that they and some other delegates when they were packing for Doha forgot to pack their consciences. President Obama either has to refresh the mandate for these negotiators or call them back to Washington.”

European Climate Action Commissioner Connie Hedegaard was asked whether changes in staff in major delegations could affect the path that the UN talks pursue. She said that while there would always be some turnover of diplomats, some changes could be positive.

“We have new people in the European Union, the German and UK ministers are both new, as are the French Ministers. They are fast learners and have done well. Changes are good,” said Hedegaard.

“Sometimes when people come to their first COP they ask quite common sense questions because they haven’t been totally polluted by the process yet!”

Calls for changes in the approach from the President and a concerted effort to shift public opinion have also emanated from Washington.

A slew of former presidential aides quoted by Bloomberg have called for President Obama to engage the American public on climate change issues and the knock-on effects for the country’s energy policy.

“The president really has to start talking about climate change again,” Podesta said in an interview in Washington. “He has to engage a national conversation, not just one White House meeting, but a big conversation.”

“The president…needs to go out in the country and explain what the problem is and what the steps are to go from the current energy economy to the next, and that it might involve some pain.”

This “pain” would be felt most acutely by the county’s oil and gas industry which has found new swagger in recent years with new offshore oil and terrestrial (shale) gas reserves opening up. In particular, the Koch brothers have visibly campaigned to discredit campaign science and undermine renewable energy,

“As the top spenders to stop climate policy in the planet’s most polluting nation, the two oil barons from Wichita hold hostage any progress in Washington, and hence any meaningful global deal,” said Victor Menotti, Executive Director of the International Forum on Globalization.

“Advancing a UN agreement requires substantial changes in US domestic dynamics to reduce the role of the Kochs, and all private money, corrupting policy outcomes. Setting stronger standards for power plant pollution will be a litmus test.”

Obama is unlikely to be able to send any negotiators new or old to the UN climate talks with the mandate that Naidoo and Meyer would like to see until the climate change message has been successfully seeded at home.

Until then, there is a sense of bewilderment among some of the world’s most vulnerable nations as to why there is such little empathy for their plight.

“I always expect Americans to be accountable,” said Emmanuel Dlamini, chair of the African Group of negotiating block at the UN talks.

“They are a respectable country, they have all the means. So honestly, when you don’t see them providing the necessary leadership for this convention, that they have signed, it is difficult. We want them to understand what we are experiencing in Africa,” he added.