Three former Soviet nations could leave the Kyoto Protocol as a result of a last minute change to the new terms of the treaty agreed in Doha on Saturday.

Belarus, Ukraine and Kazakhstan are unhappy with an amendment to the Kyoto treaty at the Doha UN climate talks that means their emissions must remain lower than they were between 2008-2010. They believe this will limit their economic development.

A negotiator representing Belarus told Reuters that he would advise his country to leave and that other former Soviet nations could do the same. Canada will officially exit Kyoto later this month having announced its intentions in Durban last year.

Russia raised its disapproval to the new Kyoto deal during the last session of the UN talks. The meeting’s President H.E. Abdullah bin Hamad Al-Attiyah, gavelled through the agreement regardless saying that consensus had been reached and Russian concern’s recorded. 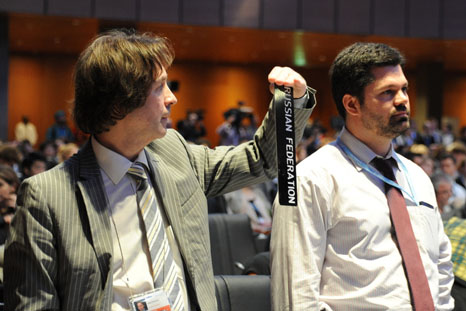 Oleg Shamanov attempts to get the attention of the COP18 president to object to change to the Kyoto Protocol. (Source: UNFCCC/Flickr)

Russian negotiator Oleg Shamanov told RTCC: “The way those decisions were adopted, extremely seriously undermines the legitimacy of the regime and trust between the participants.

“We are absolutely sure that it would inevitably have very serious legal consequences for efforts of the countries and for ratification processes,” he added.

In UN legalese the offending paragraph is Article 1, amendment G of the Kyoto Protocol.

In English, amendment G means that countries will have to match their average emissions from 2008-2010 throughout the Kyoto Protocol’s second period, that runs from 2-13-2020.

This is a problem for economies in transition like Ukraine, Kazakhstan and Belarus who had hoped to increase emissions while they continue to grow and raise the standard of living.

The amendment, which was put forward by the Alliance of Small Island States (AOSIS), effectively means only countries reducing total emissions under Kyoto, rather than limiting their growth, can take part in the second commitment period.

“Belarus and Kazakhstan aren’t really developed yet. They have emerging economies and in Kazakhstan’s case, lots of mining potential,” said Alexey Kokorin, head of WWF-Russia’s climate change programme and a former Russian negotiator.

“They will continue to see emissions growing and will incur a penalty that forces them to buy extra carbon credits so that they are back down to the 2008-2010 levels. That’s not possible. So Belarus and Kazakhstan are essentially excluded from the second period of Kyoto,” Kokorin told RTCC.

“Ukraine is also in difficult situation but has lots of hot air from the first period, so it will probably be able to take part. I spoke to someone from the Ukrainian delegation in the airport on the way home from the Doha talks and they are happy enough. They can’t sell the hot air now, so they will use it to meet this new amendment. Belarus and Kazakhstan do not have any hot air though.”

There may still be some effort to reduce greenhouse gas emissions in Belarus, even if indirectly. The country is keen to detach itself from a reliance on Russian gas and will pursue renewable and nuclear energy to do so.

Jury out on Russia

Russia is left in a more difficult situation. It will have to weigh its own predictions for its economic, and emissions growth against the cost of limiting this increase and its own stocks of hot air. While Moscow crunches these numbers, we may not know definitively whether they will continue to take part.

One analyst told Russia Today (RT) that Kyoto had brought little economic benefit and that new environmental programmes provided other methods to reduce its emissions in the future.

“The output and consumption of energy resources in recent years fell below forecasts of the Ministry of Energy and Ministry of Economic Development, so Russia won’t face sanctions. As for carbon credits sales, it brought minimum profit to the country,” Lilia Brueva, analyst at Investcafe, told RT.

“Now there are several market mechanisms to cut the burden on the environment such as developing green technologies in the energy sector and implementing bilateral agreements between neighbouring countries such as China and Russia to cut emissions or to compensate damage,” Brueva said.

All nations will have binding emission reductions from 2020 onwards if UN negotiations on a new global deal continue successfully. Talks on that strand edged nervously forwards in Doha.