UN climate chief Christiana Figures has dimissed concerns that Russia’s last-ditch protest at the end of the Doha talks will affect the Kyoto Protocol or plans for a global deal in 2015.

Russian negotiator Oleg Shamanov complained he had not been consulted over the texts under discussion, declaring the decision by summit President Al-Attiyah to close discussions was “an outrageous violation” which would have “legal consequences”.

Despite declining to take part in an extension of Kyoto, Russia was keen to retain its accumulated stock of carbon credits acquired during the Protocol’s first commitment period, a position the vast majority of other parties rejected.

“The voice of Russia was heard very clearly by all countries, before and after the adoption of the text,” Figueres said. “The objection was very clear to everyone, but it would have been a change to the text that would not have allowed for those texts to be adopted.”

Al-Attiyah said he had decided to adopt a majority decision, adding that prolonging discussions would have been like “opening Pandora’s box” 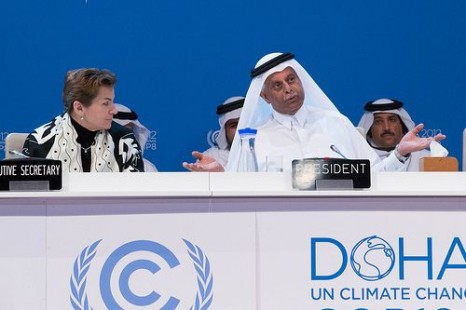 Figueres, who was seen in deep conversation with Shamanov before the final plenary session, added that she found his objections puzzling and suggested he re-examine the texts before taking further action.

“Ironically what we understand is that what Russia wants and needs is actually in those texts so my recommendation to our good Russian colleague is to take the time to read these texts,” she said.

“Now granted, all of these texts came out today and it was very difficult for anyone to read all these texts, but I am confident that when he gets home and reads the texts that he will know that Russia’s best interests are quite faithfully reflected in the texts.”

Speaking to RTCC after negotiations had concluded, a visibly angry Shamanov, who made a similar procedural complaint at the end of last year’s conference in Durban, said he would consult the Kremlin before taking further action.

Doha and Moscow currently do not have full diplomatic relations after an incident in December 2011 where a Russian ambassador’s diplomatic bags were confiscated by Qatari airport security.

“The way those decisions were adopted, extremely seriously undermines the legitimacy of the regime and trust between the participants,” he said.

“We are absolutely sure that it would inevitably have very serious legal consequences for efforts of the countries and for ratification processes.”

EU Climate Commissioner Connie Hedegaard disagreed with Shamanov’s claims he had not been consulted, saying that a variety of delegations had made efforts to bridge the gap during the final two days.

“It’s unfortunate Russia could not join the agreement – that’s not a small thing, that’s not an easy thing. I must also say that many people tried this week to reach out to Russia,” she said.

“I think in the last 24 hours there were lots and lots of efforts. I have also had meetings with Russia today – but it was a bit difficult as it was not clear to see which solution they actually want, what could make them come on board.

“Many hours were used, and I tell you since early this morning, the Presidency and others have tried to work with the Russian delegate.

“It’s unfortunate for them not to join, but it’s also clear that for the world to say you can have unlimited carry over of billions of tonnes of hot air, we know why this cannot happen from an environmental perspective.”