‘Loss and damage’ to make or break Doha climate talks

The US response to proposed new financial compensation for nations worst hit by climate change threatens to define the UN summit’s finale.

As negotiations ran into the early hours of the morning the US clashed with the Alliance of Island Small Island States (AOSIS) on the issue of Loss and Damage. This is the proposed mechanism to compensate countries worst affected by climate change.

The dispute spilled into a separate meeting room last night where protesters gathered to back AOSIS.

A small island state negotiator was seen leaving in tears. The BBC’s Roger Harrabin reports that before the text was agreed Todd Stern, the US chief negotiator, was heard saying: “I will block this. I will shut this down.”

The EU is understood to be trying to persuade AOSIS to weaken its stance in Doha and carry the debate into later round of talks. Whether the US accepts any mention of a future mechanism remains to be seen. 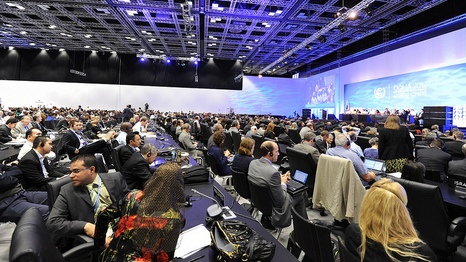 Negotiators raced through the drafts ahead of the morning plenary session reconvening. COP President Abdullah bin Hamad Al Attiyah told delegates he wanted the remaining issues resolved within two hours of the restart but this looks increasingly unlikely.

The second commitment period (CP2) of Kyoto has been proposed to run till 2020 with options to increase emission reduction targets along the way. The issue of ‘hot air’, surplus carbon credits generated by economic shift rather than carbon cuts, has reared its head again.

Russia, Belarus, Kazakhstan and Ukraine are opposed to a clause that would see additional emission credits for CP2 ring fenced in a holding account, rather than being made available for use.

Brazil Ambassador for the Environment André Corrêa do Lagos told RTCC the draft texts reflect continued disagreement over who is responsible for addressing climate change.

“We have to be disappointed because we see an enormous lack of ambition of Annexe I countries and this lack of ambition is clearly reflected in three things, first – ambition on their own targets, ambition for what the world can do through a lack of financial resources, and unfortunately they don’t have a vision of what can be done,” he said.

“The only drive that seems always present is that they don’t want to take the lead anymore. This I think is a very negative thing because this is one of the basis of this Convention, which is that developed countries need to take the lead by what they do, and by how they can support other countries.”

Protest from civil society groups continued late into the night and despite flagging energy and dwindling numbers, opposition was rekindled when the draft texts trickled out this morning.

The finance text is also unpopular with developing nation’s calls for a $60bn pledge replaced with an unquantified target to match pledges from the soon to end Fast Start Finance period (FSF). Pledges from FSF averaged $11bn a year.