Climate finance pledges are starting to emerge in Doha in an attempt to rebuild trust between rich and poorer nations.

On Tuesday the UK confirmed its commitment to provide £1.8 billion of funds, and on Wednesday Germany offered 1.8 billion euros.

In total the UK, Germany, Sweden, France and Denmark among others have now put €6.85bn on the table for the post Fast Start Finance era, which the EU claims is more than was put forward in the final two years of FSF.

US negotiator Jonathan Pershing said it is “committed” to funding adaptation and mitigation projects in the developing world.

The pledges are likely to go part of the way to building trust between parties as the critical 48 hours of talks get underway.

UN climate change negotiations have seen finance emerge as a critical issue with developing nations saying that specific numbers were a must for any deal in Doha.

There are two key sources of anxiety. The existing $30bn, three-year long Fast Start Finance (FSF) period finishes at the end of this month. There is also the long term spectre of the Green Climate Fund’s (GCF) goal of raising $100bn a year by 2020. It won’t be ready to distribute any funds till 2014 at the very earliest. 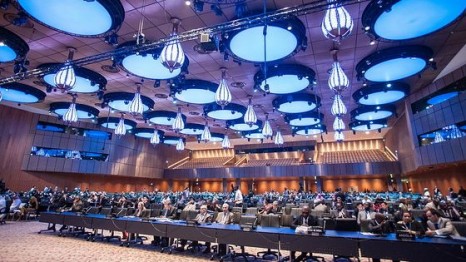 Developed countries have pointed to the various economic crises as a barrier to committing themselves to a rigid regime of climate finance in the short and long term. China and the group of 77 developing nations are keen for a “roadmap” on how the GCF will meet the $100bn target as well as a mid-term target.

Pa Ousman Jarju, chair of the group of Least Developed Countries said finance should not be considered a negotiating tactic.

“We want to see finance on the table and it is part of the package that we expect in Doha. The timeline discussions are about whether we have a mid-term target between now and 2020 before we upscale to $100bn, that would be acceptable.”

Ronny Jumeau, Ambassador of the Seychelles, part of the Alliance of Small Island States (AOSIS) praised the UK for taking the first step on climate finance but questioned whether even the long term target of $100bn was a large figure in reality.

“Today I read that because of Sandy, the Governors New York, New Jersey and Connecticut will ask the Federal Government for $83bn, not in one year, in one stop,” he said.

“We don’t like the sense that to be provided funds you have to comply with a certain way of behaving that developed countries are waiting for. That is quite a neo-colonialist view of cooperation,” she told RTCC.

“Cooperation should not involve begging for the funds. Funds that the Convention specifically says you’re entitled to, and that developed countries are obliged to provide. Now it is more like a voluntary contribution, if you do certain things. We don’t like that.”

Salerno stressed that she respected the need for LDCs and other vulnerable states to press for financial support urgently and acknowledged that Venezuela, which has the world’s largest proven oil reserves, could afford to take a more “moral” position on climate finance.

“Venezuela has the luck to stand on its own feet and to change our own national patterns but we don’t have to pledge [emission reduction] because we don’t have to beg anyone [for finance].”

While finance made some early progress, emission reduction pledges, even voluntary ones, have been in short supply with the Australia’s 0.5% Kyoto Protocol commitment and the tiny French principality of Monaco’s voluntary pledge of 30% about the best on offer.

EU climate action commissioner Connie Hedegaard has made repeated calls in Doha for pressure to be exerted on the countries that won’t have legally binding pledges under Kyoto from 2013 onwards.

“We all know it’s too few countries who commit in a second commitment period, nonetheless it’s important that some of us do it in order not to waste all the work that has been done over the years,” Hedegaard said.

“But I would just urge everybody, not to forget, to focus on what is it that the remaining countries that represent 85% of global emissions, what are they doing to add to global ambition in the shorter term?”

The UK has also called for movement on pledges. It led the early moves on finance but climate change minister Greg Barker called for action elsewhere as the last two days begin.