Venezuela: Climate finance is a form of blackmail

Climate finance in its current form is immoral and should not be used to leverage climate action from poorer nations, Venezuela’s lead negotiator Claudia Salerno has said.

“We don’t like the sense that to be provided funds you have to comply with a certain way of behaving that developed countries are waiting for. That is quite a neo-colonialist view of cooperation,” she told RTCC.

“Cooperation should not involve begging for the funds. Funds that the Convention specifically says you’re entitled to, and that developed countries are obliged to provide. Now it is more like a voluntary contribution, if you do certain things. We don’t like that.” 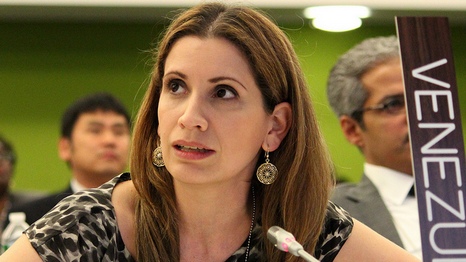 The UN Framework Convention on Climate Change, signed by world leaders at the 1992 Rio Earth Summit states that developed countries will provide financial and other support, over and above other forms of development assistance.

Salerno stressed that she respected the need for LDCs and other vulnerable states to press for financial support urgently and acknowledged that Venezuela, which has the world’s largest proven oil reserves, could afford to take a more “moral” position on climate finance.

“Venezuela has the luck to stand on its own feet and to change our own national patterns but we don’t have to pledge [an emission reduction] because we don’t have to beg anyone [for finance].”

Steve Herz, a finance expert with the US environmental NGO Sierra Club called the comments unhelpful.

“One of our goals as NGOs is to go back to our countries and pound them for the lack of ambition in the money they are providing. We can’t use that [comment]. That is not helpful to us,” he said.

Climate finance is used both to help developing nations and emerging economies to reduce their emissions as well as to adapt to the adverse impact of climate change.

A third pillar of climate finance, termed Loss and Damage, could be established in Doha to address “rehabilitation and compensation”. Progress on these discussions has been tentatively described as a cause for optimism despite strong opposition from the US and Australia.