By Ed King
RTCC in Doha

Demands from small island states for greater short-term climate ambition from the European Union risk stalling negotiations in Doha, according to observers RTCC has spoken to.

And there are growing concerns that countries who have little interest in these talks succeeding are using these fears to split the ‘Durban Alliance’ of the EU, Alliance of Small Island States (AOSIS) and Least Developed Countries (LDCs).

RTCC understands AOSIS chair Nauru has taken an aggressive stance in discussions on a range of issues, in particular demanding the Kyoto Protocol is extended for a period of five years rather than eight, calling for firm financial pledges, and asking for the EU to increase its emission reduction target to 30% in Doha.

Speaking to RTCC, a source within the EU said it was becoming clear that countries linked to the Like Minded Group, which includes Arab nations, India, China and some vocal Latin American states, were using this impasse to drive a wedge between the Durban Alliance.

“I think that is going on and we are also asking questions about their negotiating strategy,” the source said.

“There are other difficult hardliners whose agenda broadly seems to be to slow or disrupt the talks, and not necessarily because they have a proactive objective they are trying to achieve.

“They are trying to drive a wedge between the EU and AOSIS.

“AOSIS are not getting much support from the Least Developed Countries (LDCs) or Africa, and it feels pretty isolated on some of its hardline asks, and they just keep telling everyone ‘it’s political and we’ve got to wait for the ministers’.” 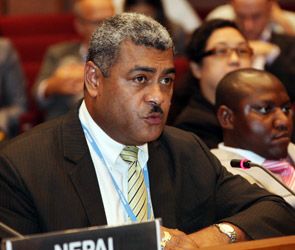 In a statement delivered last night, Nauru negotiator Sai Navoti made clear his unhappiness with the current state of the talks: “The offer currently on the table is deeply inadequate in ambition, jeopardizes the entire Durban package,” he said.

The core allies of the Durban alliance – the EU, AOSIS, LDCs and many Latins, were united behind the need for greater short-term ambition and the conclusion of a comprehensive legally binding agreement in 2015.

Together these countries convinced others that the existing drift in the negotiations would benefit no-one in the long term and that clarity on ambition and legal form was a critical part of the deal.

Without this overwhelming number of countries coming together on these two issues, it is likely that Durban would not have either set the 2015 deadline, or begun to dissolve the firewall.

Since Durban, the close relationship between the EU and its allies on these core issues has become fractious.

This political challenge to clearly demonstrate internationally short-term ambition has resulted in despair from the most vulnerable countries who are struggling to find ways of injecting ambition pre-2020.

One observer told RTCC: “entrenched positioning is not helping deliver an outcome which builds on Durban and securing a new legal treaty.”

The concern is that with ministers arriving over the weekend, the second commitment period for the Kyoto Protocol could still hang in the balance, making it harder for the EU and other parties keen for a rules-based emissions treaty to make progress on the 2015 deal.

And the EU source says the danger for AOSIS is that its hardline strategy could backfire, leading to a collapse in trust and lower ambition at the Doha talks, which would impact heavily on states that are already suffering from the effects of climate change.

“It doesn’t feel like an effective negotiating strategy, because they are going to be left pretty high with a lot of asks – because the only way they can come down is to retreat in the face of all parties saying you are in the wrong place here,” the source said.

“Maybe it’s a cleverer strategy than we think, but they don’t seem to be stacking up a lot of other things.”