There is growing pressure on the Qatari COP President Al Attiyah to heal a growing rift at the Doha climate change negotiations.

The Long term Cooperative Action (LCA) track has been the source of much ill-feeling between negotiators amid accusations that trivial objections are being used to hold up the process.

The Saudi Arabian chair of the LCA, Ayser Tayeb, has also attracted criticism from negotiators for attempting to take too much control over the process.

The US, backed by a number of other nations say a draft text proposed by the chair should be rejected out of hand and that “parties not the chair”. Others have complained that he uses his position as chair to wield influence over some more impressionable parties. 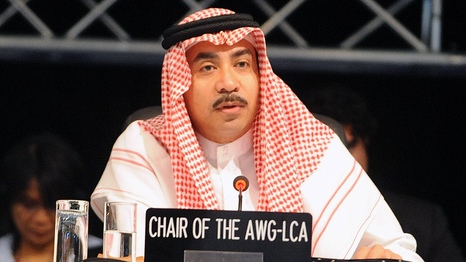 The LCA chair Ayser Tayeb attempted to draft a text to form the basis for compromise but it was dismissed by the US. (Flickr/IISD)

“The (LCA) text will look different when there are compromises that are sellable to everyone,” he told RTCC.

“The chair is there to facilitate. He will have to take from the parties what the parties think is going to be – what you can compromise on.

“If you as a chair try to sell something people don’t like then ok, you will not be a successful chair.”

The US and Japan, which is deeply unhappy with LCA proceedings, ended up in an animated row last night, reflecting the level of discord some have with the chair’s text.

“There was a bit of a kafuffle and the US kicked-up a fuss about the status of the text. Some parties seem to be working off a different version of it and there’s a lack of clarity,” said Liz Gallagher, senior policy analyst with E3G. “This is illustrative of a broader issue, a trust deficit at these talks.”

Now there are calls for the hosts, who also hold the presidency of the talks to intervene and find a compromise.

“This is a real challenge to the COP Presidency, who to date have not been incredibly visible in brokering deals. They need to engage in frontline diplomacy and help broker an outcome under the LCA and decide which text is the one we will move forward.”

Several negotiators have repeated this observation to RTCC calling into question COP18 President Al Attiyah’s interest in a successful conclusion to these talks.

A finalised draft text needs to be ready by Monday morning for consideration by Ministers at the high-level segment of the negotiations.

Chinese lead negotiator Su Wei told RTCC that the future of the 2020 global deal on emissions reduction was linked to the positive conclusion of the LCA track.

“If we don’t get a text, the LCA doesn t close. If the LCA doesn’t close we don’t get any progress on the Durban Platform,” said Gallagher. “Because of this interlinkage, the fact that we don’t have a text holds up both sides [KP and LCA]. Some parties are not so worried about not seeing progress.”

Former British Diplomat John Ashton warned of that the Qatari Presidency was sailing into “shark infested waters” and would likely face attempts to derail the process.

Speaking to RTCC prior to the start of the talks, Ashton said that in order to “keep the initiative it [the Presidency] needs to be proactive – both in public and private”.

For an overview of the structure of the UN climate change talks, check out our bluffer’s guide.

RTCC Video: Liz Gallagher of E3G on the situation in Doha