The focus on the second commitment period of the Kyoto Protocol (CP2) at the UN climate change talks in Doha could delay progress on steps towards a 2015 global deal, according to a Costa Rican negotiator.

Securing an extension to Kyoto is a key goal of this round of negotiations, but Monica Araya told RTCC that while she recognised short term ambition for a new period of binding emission reductions under the Protocol was critical, discussions on a new universal deal should continue as well.

These have been placed on the backburner while countries focus on CP2 and resolving issues around the Long term Cooperative Action (LCA) track of talks.

“We are losing sight of how important Durban was in the history of the negotiations. If we don’t have some specifics from this COP on ADP we are going to get into trouble in 2013 because we will run out of time,” said Araya. 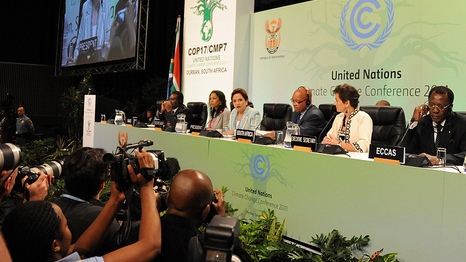 Araya calls last year’s summit in Durban “historic” but the outcomes of that meeting could be delayed in Doha. (Source: Flickr/UNFCCC)

“I fear we’re putting ourselves in a position where some countries will say that because we’re running out of time we have to move the 2015 deadline. For my country and for smaller countries that are caught up in megaphone politics by large economies, I think that should be a red line,” said Araya, whose country, Costa Rica, is part of the 27 nation Cartagena group, which pushes for greater ambition at the climate talks.

The Durban Platform (ADP), agreed at last year’s talks, was the first time all nations agreed to the possibility of making binding emission pledges.

NGOs, vulnerable nations and major emerging economies, including the BASIC, all placed the emphasis on a new commitment period of Kyoto in the build-up to the talks.

Araya is concerned that the the urgency driving the necessity for short-term action, is leading to complacency on the ADP.

“What worries me is that the rationale that is taking over is ‘oh you know we don’t expect anything on the ADP at this COP’, we just have to except nothing will happen…I refuse to accept that a year after the decision [in Durban] that we have to leave Qatar with nothing concrete on the ADP. I don’t see how that is good for my country.”

EU climate action commissioner called for COP18 to be the bridge between Kyoto and the Durban Platform.

“I hope that when we leave Doha we will be on the other side of the bridge…The bridge is made by the EU and other nations who have agreed to a new commitment period of the Kyoto Protocol,” she claimed adding that the time had come to discuss what legal form the ADP will take.

With Kyoto covering just 14% of global emissions, some argue that emission reduction efforts outside the UNFCCC are increasingly vital with a series of reports from the IEA, the World Bank and UNEP about the pressing need for ambitious cuts in greenhouse gases.

Beyond 2020, the ADP presents an opportunity for all nations to make binding cuts.

“We have come to the point in this COP where people are getting into this psychology that we can afford to wait [to act] when we know we can’t. We just had the UNEP gap report telling us that even if we meet our pledges we still fall short of the target to limit warming to 2°C,” said Araya.

“When you try to combine the insight from this report and the silence on ADP, you realize that perhaps we have deluded ourselves into thinking that we can wait until we solve A,B and C issues before we move onto ADP. We have to keep working on both.”