COP18: Making the link between women’s health and climate change

To mark the UNFCCC’s Gender Day on Tuesday, Novemebr 27 at the COP18 talks in Doha, Isobel Braithwaite, from the Healthy Planet UK campaign, explains why the perception of population and women’s reproductive health as difficult subject, doesn’t alter the fact that it is very much a climate change issue. 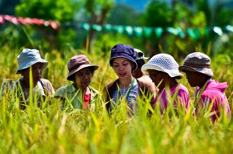 Population and family are complex topics but must be addressed, argues Isobel Braithwaite (Source: IRRI images/flickr)

There are far too many stories of forced abortions and sterilisations from the last hundred years, and unfortunately they aren’t confined to the past.

Horrific things go on to this day, with Uzbekistan’s recent violations of women’s reproductive and human rights forming just one of the more recent tales in a long and murky history.

We know about the various negative consequences of China’s one-child policy: the gender imbalance that it led to, and the isolation and overwhelming pressure felt by many of the only children born.

There are a string of other reasons too why almost everyone in the environmental movement steers away from talking about population. It’s too controversial, too complicated, or not important.

The economist Malthus was wrong: the problem is our over-consumption or the big bad corporate – population growth will slow of its own accord with development and we can’t alter the trajectory.

Last year, I heard the British naturalist David Attenborough give a speech, and one of the things he talked about was the urgent need to slow population growth.

The audience didn’t react too well – until he explained that what he meant by that was to make sure all girls had the chance to be educated, women an equal chance to be employed and that everyone who wanted family planning had access to it.

So does thinking about population really matter, or is it just a side issue without a significant bearing on our current environmental challenges?

Simon’s argument is that, ‘human impact is driven partly by human numbers’. Which makes sense: our numbers have gone from one to seven billion in a couple of centuries – as Mark Lynas noted in 2004, ‘the biomass of humans is now greater than that of any other animal species that has ever existed on land’.

Along with greatly increased average consumption of natural resources per capita, humans’ environmental footprint has sky-rocketed in the same time.

Simon argues that ‘using rights-based family planning to slow population growth is a reliable and cost-effective way of addressing climate change, and should be a central part of our climate change strategy.’

As a recent UNFPA report with the subtitle ‘By Choice, Not By Chance: Family Planning, Human Rights and Development’ makes clear, family planning is a human right – and what he wasn’t saying is that we should just tackle either population or consumption. It’s about both.

But we’re clearly not going to implement drastic measures, like a global one or two-child policy, so it could be argued that more minor efforts made would have only a marginal impact on the rate of population growth.

So is it even a relevant question to be asking? I think the answer is yes – but the reason has little to do with reducing climate change.

Attenborough argues, we should be actively promoting all of the things that generally bring down fertility rates; educating girls, ensuring gender equality, providing access to (and education about) family planning methods.

Not primarily for environmental reasons, but because they’re good things in themselves. If environmental concerns provide a driver to improve women’s lives and ensure that their rights are upheld, where’s the dilemma?

It’s hard to believe that there are still over 220 million women who want family planning but don’t have access to it in 2012; and it’s something we need to talk about more.

This July’s Family Planning Summit in London was a big step towards the goal of making family planning available to all women, with groups including governments and the Gates Foundation coming together to provide $2.6 billion per year.

That will meet the need of over half of those currently without access, but the UNFPA estimates in its recent report that another $4.1bn will be needed to ensure coverage for the remainder, but also emphasises the importance of non-financial factors such as promoting gender equality, reinforcing a rights based approach and inc.

If, as an international community, we work to provide comprehensive access to family planning and to ensure girls have equal chances and rights more generally, the benefits in terms of development and reduced resource depletion are likely to cover that investment many times over in the decades to come. If we do, it will be better for children, for parents and for society.