The UN climate convention’s fast-start finance mechanism has been plagued with unmet promises and a lack of transparency, according to a new report from the  International Institute for Environment and Development (iied).

$23.6 of the $30 billion pledged in 2009 has been committed, but  delivery of these funds is much lower, the iied warns. A report from Bloomberg New Energy Finance estimates that only $11.3 billion of this funding had been delivered by September 2011.

And the iied also warns of a lack of transparency, calling for an independent finance registry to regulate the process.

Norway was the best country to date at meeting its financial commitments, giving 492% of its fair share – 100% of it as grants and none as loans. However, with no reports submitted during the last year, Norway scored zero on the transparency scale.

Other unlikely candidates also topped the list of top contributors, including Canada, Japan, and New Zealand – all of who have been in the news recently for rejecting a second commitment period of the Kyoto Protocol.

Japan exceeded its commitments, with 291% of its fair share, while New Zealand and Canada both pledged over 80% of theirs. Japan and Canada, however, gave only 21% and 25% respectively as grants, while the rest was pledged as loans.

The iied rated the pledges made by countries on whether they fulfilled their ‘fair-share’ – both in terms of a country’s responsibility and capability.

Only Japan and Norway pledged more than their fair-share in finance. 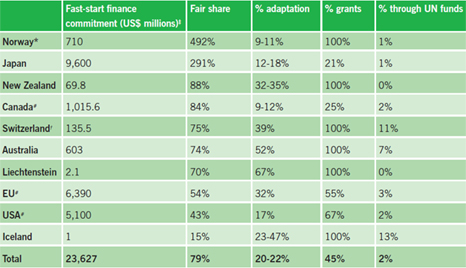 Transferring funds through the UN system is expected to help manage and govern the exchanges democratically and offer a greater level of transparency.

One of the biggest concerns raised by the iied briefing is the lack of this transparency. Most countries transferred between 0 and just 13% of funds through the UN.

Transparency scores were also judged on the timeliness and clarity of information, how countries defined new and additional finance and how accessible funds were for developing countries.

Switzerland scored highest on this promise – by with a score of just 67% this is still a poor grade. 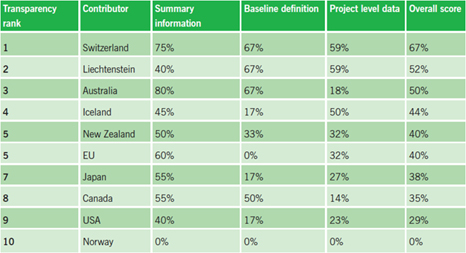 Transparency scorecard for fast-start reports filed in May 2012 (Source: iied)

The fast-start finance was a pledge of $30 billion for the period between 2009 and 2012. Countries meeting for the latest round of UN climate talks in Doha, will now be working out how to turn this into $100 billion per year by 2020.

The key conditions of climate finance are that it is ‘new, additional, predictable and adequate’, and as this report suggests this has been difficult to achieve.

While mechanisms such as the Special Climate Change Fund, the Adaptation Fund and the Least Developed Countries Fund are becoming better established and promise more transparency, the 2012 results show there is still work to do to ensure real transparency and build trust between developing and developed nations.