The USA backed the UN climate change talks today, after rumours earlier in the month that it was seeking to shift discussions on greenhouse gas emissions to another forum.

Speaking at the country’s first press conference at the negotiations in Doha, Deputy Climate Change Envoy Jonathan Pershing said other work could only ever be an addition to the UN process. 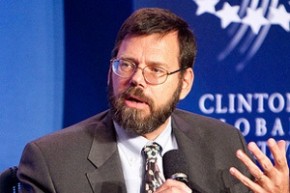 US Deputy Envoy for Climate Change Jonathan Pershing said the UNFCCC was essential but not the only forum for action.

“The way we see it is that nothing will replace this body. It is a body with universal membership, global participation and one that hopefully will be the foundation of efforts as we go forward,” said Pershing.

“But we don’t see this as the only place where action can happen. We see that happening in a variety of different institutions and arenas with different purposes.”

When rumours of a split initially broke, they were dismissed as a disruptive negotiating tactic.

“These kind of statements are provocative and unnecessary timing wise, and could potentially undermine the US’s core interests in Doha,” said Liz Gallagher, senior policy advisor with the consultancy E3G at the time.

On Monday however, Pershing cited sectoral issues where action outside the UN would be beneficial. He used the example of dealing with forestry and its related carbon through smaller groupings of the most affected nations.

He also praised negotiations through the G20 to address fossil fuel subsidies, which encourage inefficient use of the fuels, saying those talks had “enormous potential”.

“Importantly, in response to the calling of science we need to begin identifying the additional efforts that are either under way or being planned, that are not quantified by governments, but that can be encouraged and must be encouraged in order to increase ambition,” said Figueres.