COP18: EU says there will be no climate finance gap

There will be no gap in climate finance despite the current funding programme concluding at the year’s end, the EU’s lead negotiator has said.

The existing Fast Start Finance (FSF) period running from 2010-2012, with the target of raising $30bn during its length, conclude on December 31. There have been concerns that the absence of a new formal round of climate finance would create a vacuum. 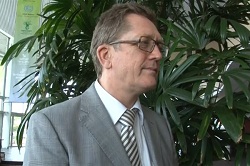 Arthur Runge-Metzger, lead EU negotiator, has said there will be no climate finance gap.

“I hear many people saying ‘what about after FSF, is there not a finance gap after 2013?’ There will be no finance gap,” said Artur Runge-Metzger at the bloc’s first press conference of the UN climate change negotiations in Doha.”

Climate finance is used to help poorer nations reduce their carbon emissions and in some instances, to also help them adapt to the consequences of climate change.

“My co-workers in the operations department are busy with their colleagues in developing countries to fill the project pipeline for the next year. There will be continued climate finance allocated next year and a lot of that will be used to implement what we have promised to each other at previous negotiations and what we decide here in Doha,” said Runge-Metzger.

The EU recently said it would not make a collective announcement in Doha on climate finance, instead leaving the responsibility to individual members.

The group is currently in the midst of a budgetary crisis with disagreement on whether or not the budget should be cut. The Eurozone crisis continues to loom large over the continent as well.

“The EU has a good track record, we have fully delivered on FSF. We’ve honoured our commitments, that is no small achievement, particularly when you look at the public finance situation we have been facing for a number of years. The EU has also been the largest contributor of ODA showing our commitment to developing countries,” said Runge-Metzger adding that the EU contribution now totals €7.2bn ($9.3bn) of the $22bn already pledged.

The press conference also reconfirmed a number of the EU’s long-standing positions for the Doha talks.

In particular he reiterated that the current emissions reduction pledge for the second commitment period of the Kyoto Protocol would remain at 20% by 2020 compared to 1990 levels, a figure some have called unambitious. Runge-Metzger said “realistically” this was unlikely to change adding that its offer to increase it to 30% remained if others increased their own pledges, be they voluntary or binding.

India has already confirmed that it will not improve its own promise to reduce its greenhouse gas output by 25% (compared to 2005 levels).

“We’ll move our target if the conditions are right,” said Runge-Metzger. “We want countries with a higher and lower target range, to aim for the higher end of the scale. With Japanese election close, and Obama still assembling his new Cabinet in the US, we can’t expect anything from those two either.”