The Green Climate Fund (GCF) was established with the goal of funnelling $100bn a year by 2020 from a variety of sources into climate projects that need it.

It has an interim secretariat, a board, co-chairs and even a host country. But as of yet, it has no money. 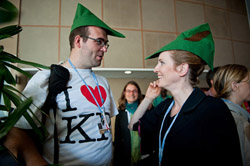 The Robin Hood Tax is the most popular suggestion to fill the Green Climate Fund but is out of the UNFCCC’s remit (Source: Flickr/RobinHoodTax)

There have been numerous suggestions.

Developing countries are keen to see as much of the money come directly from governments.

The developed world is quick to stress that the $100bn figure was always meant to incorporate private sector sources.

With that in mind, here are five potential sources that can exceed the GCF’s $100bn target. All of the following suggestions are currently in place or under development.

Government money
The existing period of Fast Start Finance (FSF), developed to partially fill the whole while the GCF was in development, generated a promise of $10bn a year.

If no agreement is made to increase those pledges, and they are filtered through development banks, like Germany’s KfW, this can be leveraged to generate even more investment.

Multiplying this public money by a factor of four would be a conservative assessment of how banks can amplify this initial investment.

Shipping emissions
Discussions on how to extract a carbon-linked levy from the shipping sector is a tricky process.

Negotiations are on-going through the International Maritime Organisation (IMO) and progress has been made this year.

International shipping is a growing industry already responsible for around 3% of the world’s emissions and could be worth $10bn a year, according to WWF.

OPEC oil exporter’s tax
Ecuador is understood to be leading a group proposing a levy on oil exports of 3-5%. OPEC is rumoured to be considering the proposals. The estimated value of this charge of $40-60bn. We’ll split the difference and call it $50bn.

Aviation emissions
Following the EU’s climb down on including all flights in or out of the Europe in its Emissions Trading Scheme, work is now resuming to develop a global scheme.

The US calculated that it would pay $2.8bn a year into the EU scheme.

The final total would include all civil flights globally, this figure is only flights by US airlines into the EU. A global deal would generate a figure perhaps 10 times great but in the interest of being conservative, we will us the very modest estimate of $5bn annually.

Financial Transaction Tax (FTT)
Sometimes referred to as the Robin Hood Tax or the Tobin Tax, the concept is basically a small levy applied to transactions involving stocks, currencies and commodities.

Critics have said it could distort markets and drive companies out of jurisdictions where the tax applies. A group of 10 EU countries is working on an FTT and says it could generate $74bn.