COP18: A bluffer’s guide to the UN climate talks in Doha

This year’s main UN climate summit heads to the heartland of Oil and Sand – the Middle East.

The Qatari hosts will need all of their much-vaunted diplomatic skills to navigate two weeks of what participants frequently describe as dirty and devious negotiations.

Stakes are high. The world may be heading for a climatic catastrophe if greenhouse gases (GHG) are not aggressively reduced, but as yet governments cannot decide on what course to take.

Arguments rage over who holds primary responsibility for human-induced climate change, the developed or developing world? In 2011 China accounted for 29% of global carbon emissions, leading the United States (16%) and the European Union (11%). 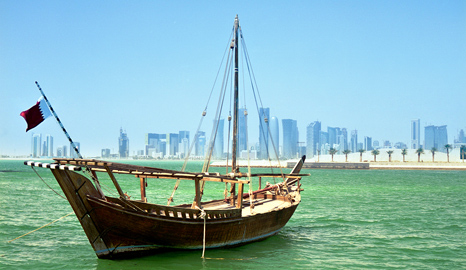 The latest strategy is the Durban Platform, agreed at the last round of major talks in 2011, which calls for a universal legal agreement in 2015 that will come into force by 2020.

This sounds achievable. But a report this week from the United Nations Environment Programme says by 2020 it could be game over – such are the current levels of emissions.

The sense of urgency was further reinforced by a World Bank study warning of dire consequences if global average surface temperatures rise by more than four degrees above pre-industrial levels.

Action is needed now – the question is from whom?

An eight-year extension to the Kyoto Protocol from 2013-2020 is top of the list for these talks – but don’t be deceived into thinking this signals ambition on the global climate.

KP2, or CP2 (Commitment Period 2) is more about keeping the ‘rules’ of emission regulations and carbon markets intact, rather than heralding massive cuts in GHG  emissions.

The EU, Norway, Switzerland and Australia have all announced they will sign up – but nothing has been agreed yet.

New Zealand, Japan and Canada won’t. Ukraine might, Russia are playing hard to get. And then there’s the awkward moment when Poland say they won’t, until someone reminds them they’re part of the EU.

KP is toxic for the USA. It will meddle and take part in talks, but forget a signature.

The Least Developed Countries (LDCs) – most of sub-Saharan Africa, and the Association of Small Island States (AOSIS) both want a five-year extension followed by another ambition review.

For them eight years means lower emission pledges for longer. Their proposal might ensure higher emission cuts, but the EU won’t budge – it’s eight years or nothing.

Major emitters such as China, India and Brazil will all sign up to KP2, but bear in mind that as ‘developing’ countries they will have no binding emission commitments.

To an extent it seems the 2015 deal depends on KP2 talks progressing smoothly.

Discussions on this major piece of climate legislation – which is scheduled to be ready in less than two years – will take place in one of the two Durban Platform groups.

It’s early days. Delegates have to agree on the number of meetings they will have over the next two years, and when ministers should get involved. A set of ‘milestones’ will be useful.

These talks could get feisty. In Durban the text called for a ‘Protocol applicable to all Parties’, and that means both developed and developing countries.

It’s also worth remembering that such a deal would not come into force until 2020.

So while many wealthier states are pushing for a 2015 agreement that encompasses all parties, a bloc comprised of poorer nations want ambition pre-2020 explored.

Despite both sides wanting a similar outcome, this conflict has the potential to derail the talks.

The Ad hoc Working Group on Long-term Cooperative Action under the Convention (AWG-LCA) doesn’t sit easily in a bluffers guide – even if many of the negotiators taking part are natural born bluffers.

It’s a 5-year-old negotiating track, created at the 2007 Bali conference, and scheduled to end in Doha. Broadly speaking, the LCA is about adaptation, finance, tech transfer and capacity building.

The concept of equity runs through the LCA’s heart – but we’ll deal with that in a moment.

Now we have the sight of a 2015 deal, in theory the track isn’t needed anymore. But it’s close to the heart of many developing nations who see it as a forum for exploring how they can secure help from wealthier states.

Discussions here will focus on what elements of the LCA talks can be transferred to other parts of the negotiating process – specifically finance and tech transfer.

The EU and USA say legally it has to conclude in 2012. They’re bluffing. It doesn’t – if need be it can stay in limbo.

One small word – one big problem.

Equity and Common But Differentiated Responsibilities (CBDR) are central to any climate agreement. It boils down to perceptions of who holds primary responsibility for global GHG emissions. We may all be in this together, but are some more responsible than others?

Do we blame Europe, which gave birth to the Industrial Revolution and began carbon-loading the atmosphere in the mid-18th century, or China, where rampant industrialization and associated carbon dioxide emissions have now reached a new level of ferocity?

It’s a view that is supported by countries vulnerable to climate change, who believe any effective deal has to see China and India restrict their future emissions.

The EU appears to be in a position where it can act as a broker between both sides, joining the LDCs and AOSIS to form a coalition that may span the divide.

This is the point where a perfect storm could hit Doha, as it is unlikely that there will be much cash on the table at COP18.

Even Christiana Figueres, who would probably find a positive spin if a meteor were heading for Earth, says she doesn’t expect any major pledges.

The 2010-2012 Fast Start Finance (FSF) period ends this year, and developing countries are asking what funds will be available from 2013 to support national adaptation and mitigation actions.

FSF was $10bn per year – although so far approximately $23bn has been delivered. Another period could be a short-term fix.

Long-term finance is equally troubling. Developed countries have pledged $100bn/year by 2020 – those in need are sceptical that this will ever arrive.

South Korea was recently selected to host the Green Climate Fund but will the mechanism be able to mobilize international development bank loans and, crucially, private capital if public funds are not forthcoming?

The answer from one leading negotiator: “Do not expect a quantified target/look for the language of the text to get around this.” Will a public commitment to the $100bn be enough?

His Excellency COP18 President Al Attiyah lacks nothing in charm. Perhaps these instincts were well honed while he was OPEC President, or the reason he won the Petroleum Executive of the Year Award in 2008?

It’s easy to be critical of Al Attiyah before he has even started – so let’s give him a few days. He’ll have to battle against the perception of many delegates who think he is in the pocket of big oil and a puppet of Saudi Arabia, which has a long and proud history of obstructing the climate talks.

Balance, neutrality and transparency will be vital qualities for a Presidency that must be visible and steer clear of the temptation to engineer backroom deals.

One diplomat kindly described Qatar’s last few weeks as being a “steep learning curve”. Perhaps they could have benefitted from importing an experienced campaigner to help him, as they have done so successfully in athletics, but it’s too late for that now.

One request Your Excellency. No more lectures on how shale gas will keep the world cooking for the next 300 years please.

A second commitment period for Kyoto is the bare minimum. KP2 negotiations must gain early momentum and include the potential for early review to increase ambition ahead of 2020. EU, Australia, Norway & Switzerland must all back CP2. Ukraine and Russia would be the icing.

EU, AOSIS and LDCs need to stand up to USA and the Umbrella Group over blocking tactics, build on 2015 planning, working with China and India to address equity concerns while adding more shades to the current extreme of CBDR.

In absence of a pot of gold falling into the main plenary, developed countries need to make public commitments to long-term financing, and explore potential for a second Fast Start Finance period.

A climate ‘awakening’ for the Middle East is a potential win here too. UK climate minister Greg Barker alluded to as much recently, suggesting an aim for him in Doha was to get them to join the low-carbon agenda. And Tory MPs call him a nutter?

Above all – the point to realise is that there is no clear prize at the end of the two weeks. Whatever is agreed will be a fudge, and don’t be deceived by the smiles come closing time.

If you want a  more in-depth look at COP18 – visit our dedicated section, where we’ll be bringing you news and analysis as the summit progresses.