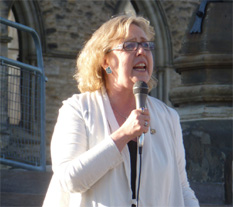 May has called on countries to call Canada to account for exiting from Kyoto (Source: m.gifford/Creative Commons)

Canada’s unpunished withdrawal from the Kyoto Protocol damaged the treaty’s integrity and the prospects of a future climate deal, according to the country’s only Green Party MP.

Speaking to RTCC ahead of the UN climate talks in Doha, Elizabeth May said that the Canadian government’s decision – announced just days after last year’s summit – encouraged other countries to follow suit.

“When we are trying to negotiate binding legal terms, Canada’s behaviour has been able to denigrate the impact of signing onto a binding legal target,” she said.

“We have also undermined [Kyoto] and created the space for Russia and Japan to stay out of the second commitment period group of targets – although they are not legally withdrawing from Kyoto.”

An extension to the Kyoto Protocol is top of the agenda at the forthcoming climate talks in Doha. It will take over from the current agreement, which expires at the end of 2012.

The EU, Norway, Switzerland and Australia have announced they will continue with the Protocol, while Japan, New Zealand and Canada are among developed states who have confirmed they will not.

May said countries should denounce Canada on the international stage for their withdrawal, which comes into effect on 16 December, arguing the country should not be allowed to participate in negotiations on the second phase.

“I’m horrified that our appalling government believes that it will negotiate in the room on the second phase of Kyoto even though we filed a letter to legally withdraw,” she said.

“I think that civil society around the world and other governments should take Canada to task for having the gall to be planning to negotiate rules around the second commitment period of Kyoto even though we filed a legal notice of intent to withdraw.

“If we want to be in the room negotiating then we should tear up the letter.”

The government – led by Prime Minister Stephan Harper – received sharp criticism for its withdrawal from Kyoto. Making the announcement, Environment Minister Peter Kent said the Protocol had become ‘irrelevant’ as it did not include some of the world’s biggest emitters, particularly China and the US.

He said a new global deal, to be agreed by 2015 and enforced from 2020, is now the priority. Earlier this week, however, Kent did speak out on climate change calling it a “very real and present danger” for Canada.

Talking in response to Superstorm Sandy which hit the US earlier this month, Kent said increasing extreme weather had “focused minds” on global warming.

While praising the words of the Environment Minister, May said she expected this to equate to “better rhetoric” in Doha but not in increased action.

And for the Green Party leader, ambition in Doha will be essential as she says a 2020 deal will be too late for the environment.

“We know they [the Canadian Government] are very much focused on the long term agreement to come into effect in 2020,” she said. “But any legally binding agreement that doesn’t come into effect until 2020 misses the boat because if you look at the science, we have to ensure emissions stop rising by 2015.

Canada has previously been criticised for its failure to set clear legislation for big emitters to cut their emissions.

The country takes a sector-by-sector approach to emissions reduction, having brought in rules for cars and coal-fired plants but not for other polluting industries.

In particular it has been in the spotlight for the exploitation of the Alberta tar sands, which produce around 1.7 million barrels of oil a day. Current approved projects could take this to 5 million.

The tar sand extraction process is energy and water intensive; 3-4.5 times more intensive that conventional oil production in Canada. Vast amounts of forest and peatlands have also been cleared for the extraction process – further intensifying the climate impact of the projects.

Campaign group the Price of Oil warns the production of tar sands oil could smash the world’s hopes of preventing a 2°C temperature rise.

In British Columbia (BC) protests erupted over the potential of laying pipelines across the region carrying bitumen from northern Alberta to a tanker port on the BC coast.

May is on the frontline on efforts to halt the expansion of the tar sands. She has called Prime Minister Stephan Harper to quit many times, and faced heckling by the New Democrats in Parliament, when she asked whether their leader had any policies to take action on climate change.

But she believes public opinion is against the oil sands and calls for a more sensible approach to its production.

“Canadian public opinion is still 80% concerned about the climate crisis,” she said. “I’d say most Canadians wouldn’t say shut down the oil sands but neither does the Green Party. We say look lets make sure we stop expanding them until we can reduce the energy and water input per barrel of oil.

“Canadians have been upset about the impact of the oil sands for a long time and it is a question of figuring out how do we have a national strategy that takes into account that Alberta does have this resource, how does it get used, how do we ensure that it is used in a way that does not put Canada in the lead of climate villains globally.”