UNEP warns global emission levels are out of control

The transition to a low carbon global economy is taking place ‘far too slowly’ to avoid potentially catastrophic global warming this century, according to a report released today from the United Nations Environment Programme (UNEP).

The Emissions Gap Report 2012 says that even if the most ambitious of emission reduction pledges were implemented by all countries, this would not be sufficient to avoid a temperature rise of 2 degrees Celsius this century.

UNEP bases its analysis on previous assessments that state emissions need to be on average 44 gigatonnes (Gt) or less in 2020.

Currently it says levels are 14% above what they need to be in 2020, and predicts that if no swift action is taken a ‘gap’ of 8 Gt of CO2 equivalent by 2020 could emerge.

The authors identify seven sectors where they believe significant emission savings can be made: 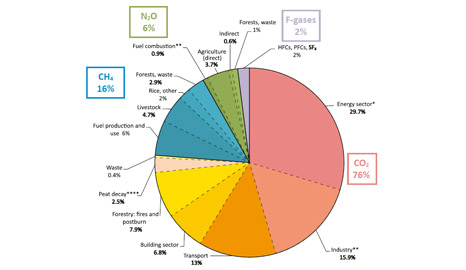 Responding to the findings UNEP Executive Director Achim Steiner said they were more evidence that the window of opportunity to mitigate the causes of climate change was closing year by year.

“While governments work to negotiate a new international climate agreement to come into effect in 2020, they urgently need to put their foot firmly on the action pedal by fulfilling financial, technology transfer and other commitments under the UN climate convention treaties”, he said.

“There are also a wide range of complementary voluntary measures that can that can bridge the gap between ambition and reality now rather than later.”

This report is the latest in a series of warnings delivered by international organisations and business ahead of the next round of UN sponsored climate talks, which start on Monday in Doha.