An increasing number of countries and regions around the world are actively developing and implementing emissions trading schemes as a leading strategy to place a price on greenhouse gas (GHG) emissions.

A fragmented system could open the door to “hot air”, a disparaging term for emissions allowances with little environmental integrity, being created on a large scale. In the European Union (EU), for instance, an emissions trading system, the EU ETS, has become the central instrument for cutting emissions in industry and the power sector.

In the Asia-Pacific region, several schemes are in place (Australia, New Zealand, Tokyo) or under development (China, South Korea). In addition Japan is developing a bilateral offset mechanism intended to complement the Clean Development Mechanism (CDM) in a future climate agreement while California is implementing an emissions trading scheme with its own non-UNFCCC based offset framework. 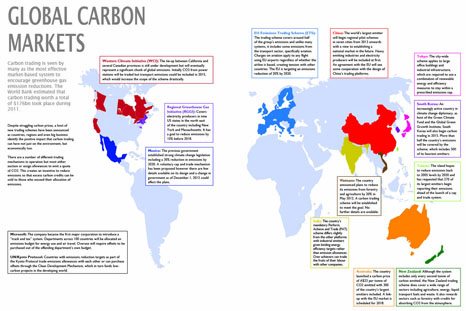 Due to difficulties encountered in achieving consensus on emissions mitigation through the UN climate negotiations since the COP15 meeting in Copenhagen in 2009, momentum appears to have shifted from the international level to that of nation states and regions.

Some of these “bottom-up” initiatives may be developed outside the UNFCCC framework leading to the possibility of a fragmented international carbon market.

In this context, the Durban Climate Conference in December 2011 agreed on the creation of a new market-based mechanism (NMM) and to consider the establishment of an overall framework for various mitigation approaches, including opportunities for using markets.

The Framework can therefore provide the “glue” that connects and recognises future national and regional mechanisms under the UNFCCC. If Parties were to agree on minimal criteria that would guarantee a sufficient level of environmental integrity, carbon credits from different systems could be traded across borders.

Apart from enabling future market links and ensuring environmental integrity of units the framework may assist developed countries in achieving their emission targets.

Little consensus, however, has yet been reached with respect to the governance and the roles of the Framework. On one hand there is a group of developed country Parties, including Japan, New Zealand and the US, that favours a predominantly “bottom-up” approach with no or little UNFCCC oversight of the mechanisms developed by countries.

In these countries’ view the UNFCCC should merely have a facilitative role. On the other hand, the EU and developing countries are in favour of a more centralised framework with common rules.

In addition, some developing countries argue that market mechanisms should only be available for developed countries that have adopted internationally legally binding emission targets. Given these political differences, it is doubtful that a bold decision will be taken on market mechanisms, be it at the level of the NMM or the Framework, at the next COP meeting in Doha. It is difficult to foresee how the negotiations on the framework will play out.

The fundamentally diverging views of Parties will be hard to bridge. Japan, New Zealand and the US are rhetorically committed to high standards and propose that the integrity of mechanisms could be an item of the newly established “International Assessment and Review” process.

However, if there is a proliferation of bilateral mechanisms, substantial resources would be needed to review them. In practice, in the absence of UNFCCC oversight, the task of scrutinising other countries’ bilateral mechanisms would fall mostly on the EU as most developing countries would probably have no capacity to spare for this purpose. Most UNFCCC Parties would therefore have to blindly believe the claims that bilateral mechanisms adhere to high standards.

Creating a strong central capacity at UNFCCC level according to the rule-setter and reviewer models (see below) is therefore the only option that is able to comfortably assure the vast majority of UNFCCC Parties that environmental integrity is in fact ensured and to prevent the creation of “hot air”. This does, however, not exclude that some reasonable balance may be struck between centralisation and flexibility.

How could a global patchwork of carbon markets function?

Several design options for the framework are on the table that range from decentralised to centralised: a “Library of Parties’ Approach”, a “Reviewer of mechanisms”, a “Provider of best Practice Guidance”, a “Rule Setter” and a “Centralised Approval Process”. Some of the models could be, and others need to be, implemented in combination with others.

Based on the claim for transparency, the Library model allows scrutiny and puts pressure on Parties to use reasonable standards when establishing a mechanism. But in the absence of an international review that ensures that the information disclosed is analysed in a systematic way, it is uncertain whether Parties will be able to play an efficient supervisory role.

The Review model addresses some of these problems, as it entails carrying out an international review. In the absence of a sanctioning power of the international community, it may however remain a blunt tool rather than a sharp stick.

The Best Practices model may provide a good middle way to develop standards step-by-step, based on the sharing of the knowledge of a large array of stakeholders. Its effectiveness in ensuring a sound environmental outcome will, however, hinge on how the standard setting process is framed and whether best practices are broadly followed by Parties.

The Rule-Setter model finally, combined with a Centralised Approval process, may offer major advantages, providing an effective check against the temptation for Parties to inflate artificially the number of credits generated, a uniform standard setting procedure and a common set of rules, which may, in the case of a violation, be sanctioned.

While these characteristics provide valuable safeguards for maintaining a level playing field, centralised governance by itself does not guarantee the environmental integrity of the credits generated. As the experience with the CDM has shown, a robust institutional design, sufficient resources and the possibility to impose effective sanctions for clear violations by Parties will be vital to ensure a satisfactory outcome.

This article is a summary of the following publication: Joelle de Sepibus , Wolfgang Sterk and Andreas Tuerk, Top-Down, Bottom-Up or In-Between: How Can a UNFCC Framework for Market-Based Approaches Ensure Environmental Integrity and Market Coherence? NCCR Trade Regulation Working Paper No. 2012/31.