What does business want from the UN climate change talks?

The role of big business in multiplying government climate finance pledges cannot be underplayed with the queues of people lining-up to stress that the Green Climate Fund cannot meet its goal of raising $100bn a year by 2020 without it.

As well as providing the cash to fund projects to cut carbon and reduce the impacts of climate change, the private sector can also lend expertise and develop projects at the scale required.

Many of the issues on the table at the UNFCCC, carbon trading, REDD+, the Green Climate Fund, technology transfer to name a few need the buy-in of big business to succeed.

In the UK, the private sector is pushing harder than the government on many domestic green issues.

Financial institutions, big investors, business groups and banks have lined-up ahead of Doha to make their final pleas to government’s before the talks continue. 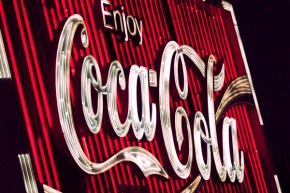 Coca-Cola are among a host of global brands, major investors and financial institutions calling for sustained action in Doha. (Flickr/Newtown Graffiti)

Nick Robins, Head of Climate Change Centre, HSBC told RTCC that while there are clear priorities for the private sector, this next round of talks could be a case of no news is good news.

“The hope is that the Doha COP will be relatively low-key and workmanlike after the breakthrough that we saw in Durban,” said Robins while acknowledging that there are still objectives to be ticked off the list in Doha.

“The most important thing in Doha is to keep the options open for future agreements. It’s important to push on with the second commitment period of the Kyoto Protocol, even though we acknowledge that that will be largely symbolic.

It is expected that many of the elements of the Kyoto Protocol will be transferred into the new global deal, which must be agreed by 2015 and enforced by 2020.

“We need to have clarity on climate finance post-2013 when the fast start finance concludes This is a tough time for government spending but some form of commitments will be needed post-2013.

“Third, we need to see the layout of a plan for the talks up to 2015 to give confidence to governments and people like institutional investors that there is a credible pathway to delivering an international agreement by 2015.”

What business wants in Doha

“At Rio+20 we saw the emergence of business (as opposed to governments and NGOs) as the driver of change. Business has a key role to play in helping governments feel comfortable in debating these key issues, out in the open and in giving governments the confidence to set new legislation in place.

“At COP18 real progress will need to be made to extend the Kyoto Protocol beyond its original expiration date of 31 December 2012. This extension is essential if progress is to be made and business will eventually feel the effects of any such extension as countries and regions enact new carbon regulations in response. In the meantime, carbon regulations will continue to emerge and evolve at the national and sub-national levels.

“However, there are also other discussions at COP18 that will likely create more immediate risks and opportunities for business.

“In the area of climate finance, the Green Climate Fund will move closer to launch, with ambitions to harness much of the US$100 billion per year that developed countries pledged at COP15.

“Finally, COP18 should start a serious conversation in the business world about climate-induced losses and damage, after the UNFCCC’s Subsidiary Body on Implementation (SBI) presents its research and findings on the topic.” 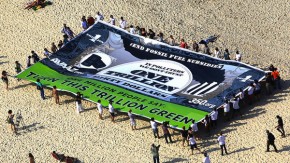 Business played a key role at the Sustainable Development talks in Rio earlier this year and also featured high on the agenda too. (Flickr/Avaaz)

Chris Davis, director of investor programs at Ceres and the Investor Network on Climate Risk:

“Strong carbon-reducing government policies are an urgent imperative. Hurricane Sandy, which caused more than $50 billion in economic losses, is typical of what we can expect if no action is taken and warming trends continue.

“Investors are rightly concerned about the short and long-term economic risks of climate change and understand that ambitious climate and clean energy policies are urgently needed to avoid catastrophic impacts.”

Norine Kennedy, vice president for environment and energy with the United States Council for International Business whose members include Coca-Cola, Apple, Exxon Mobil and Unilever:

“Following the US presidential elections and in the wake of Hurricane Sandy, the possibilities for significant progress at the upcoming UN negotiations may have gotten some momentum. For business, we hope that this momentum will lead governments meeting in Doha to focus on pragmatic, inclusive and cost-effective action, with the active engagement of the private sector.

“COP18 offers an opportunity to learn from the sub-optimal Kyoto Protocol. USCIB will encourage governments in Qatar to lay the foundations for a comprehensive, long-term post-2020 agreement that draws on business expertise and investment to address climate change risks and advance energy security and sustainable development.”

“Serious climate change will only be averted if governments and private investors work together. With severe weather events increasing in frequency and intensity, economic losses as a result of these events are increasing in turn. These losses impact upon the investments and retirement savings of billions of people.

“Well-designed, stable policy which stimulates clean energy investment is essential to put economies on a low-carbon path and avert the serious economic impacts of climate change.”

“Putting a clear, transparent and unambiguous price on carbon emissions must be a core policy objective. Although there are a number of mechanisms that can be used to do this, as businesses we would focus on working through the market, utilizing approaches such as emissions trading which offer both environmental integrity and flexibility for business.

“A price on carbon will reveal the lowest cost pathway to existing emissions reduction goals and can open the door to increased ambition. Such increased ambition is vital if we are to ‘prevent dangerous anthropogenic interference with the climate system’. With the right approach a carbon price will also help engage consumers and incentivise behaviour change.

“We therefore urge policy-makers to focus on introducing a clear carbon price framework in a stable and timely manner. This means making carbon pricing a central part of national policy responses, working towards the long term objective of a carbon price throughout the global economy, and setting sufficient ambition through internationally agreed targets to drive change at a pace commensurate with the 2°C goal.”

“The UN’s initiatives to discuss climate change are very important and the Doha Climate Change Conference shows that there is still a lot of work to be done. Unfortunately, tensions and disagreements between countries often prevents any actionable plan to be devised.

“So we as an asset manager prefer to focus on national (or international as European) policies, and on solutions to climate change that have economical sense on a standalone basis.”