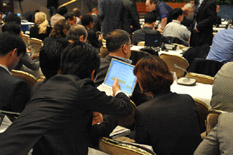 Researchers warn that poorer countries miss out by not having a large a delegation as richer countries (Picture Source: UNFCCC)

Delegations to the the UN climate talks should be capped to ensure rich states do not have an undue advantage over developing world nations with smaller numbers of trained negotiators.

That’s the view of a new report from the Tyndall Centre published in Nature Climate Change, which calls for the UN to modernise what it says is an outdated and unfair climate negotiation process.

Developed world negotiating teams have delegations numbering 100 or more, while African and small island states can often only muster a handful of diplomats. These nations are often the most vulnerable to climate change and demand greater emission cuts from the first world.

But while some countries’ delegations have increased in size over the years such as the G7 and +5 countries (Brazil, China, India, Mexico, and South Africa), others, mainly poorer nations, have decreased.

“The UN must recognise that these antiquated structures service to constrain rather than compel co-operation on international climate policy,” said Dr Heike Schroeder from the Tyndall Centre.

“The time is long overdue for changes to institutions and structures that do not support decision-making and agreements. Poor countries cannot afford to send large delegations and their level of expertise usually remains significantly below that of wealthier countries.

“This limits poor countries’ negotiating power and makes their participation in each session less effective.”