India’s chief climate change negotiator R R Rashmi has claimed the European Union is looking to delay a new phase of the Kyoto Protocol, just one week before the talks resume in Doha.

Rashmi, joint secretary for climate change at the Environment and Forests Ministry, told a media briefing in Delhi on Friday that the EU was seeking to make the second commitment period (CP2) of Kyoto, dependent on the conclusion of talks to establish a global deal.

This would delay the new round of cuts for developed countries operating under Kyoto by at least three years.

“Clearly they will gain more time to keep their obligations open if the talks get extended beyond 2015. Then the ratification process will be delayed as long as negotiations under the DP are not concluded.

“In a way a new linkage is being forced on us. The deal in Durban was that CP2 would be agreed fully, finally and implemented legally in Doha,” said Rashmi.

His comments contradict what EU negotiators have told RTCC. They say bloc is keen to start an eight-year commitment period under Kyoto from 2013-2020, and are looking forward to signing this off at COP18. 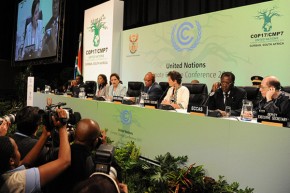 Talks in Durban last year in Durban agreed a new global deal was dependent on a second phase of Kyoto starting in 2013, not the other way around. (Source: UNFCCC)

It is not unusual for delegates to make controversial claims a week before talks start. This can often be a tactic to ensure opponents start on the back foot.

Countries agreed in Durban last year to begin discussions on a framework for both rich and poor to make emission reduction pledges.

A condition of the so-called Durban Platform (DP) deal was that developed countries in return, would establish a renewed commitment to reduce their greenhouse gases under the existing Kyoto Protocol.

Countries meet in Doha next week to begin work on the new deal and to establish a new phase of the Kyoto Protocol.

Rashmi claimed that the EU is now trying to link the CP2 with the Durban Platform talks so that one does not proceed until the other is agreed upon. He says this will allow commitments under Kyoto to be delayed while work on the new deal progresses.

“Very bluntly, the EU gains by not ratifying and keeping its Kyoto Protocol obligations open and secondly to link it to the process of negotiations under the DP,” said Rashmi. “The DP negotiations are not going to conclude before 2015.”

Explaining how the prospect of an incomplete new commitment under Kyoto might affect enthusiasm among developing nations for the Durban Platform, Rashmi said: “You can take your own guess how it would factor in on the other elements.

“The second commitment period is part of an overall compromise reached in Durban. It was part of a package. If any element of this package is not realised and there are some parties that want to move in one particular direction, without attending to other elements of the package, this can lead to an upset,” warned Rashmi.

“So it would be important for every country that is engaged in the negotiations in Doha to understand this delicate balance.”