The World Bank has warned the planet is on course to warm 4°C by 2100 unless urgent action is taken to address the cause of climate change.

The World Bank’s Turn Down The Heat report, released a week before the next round of international climate talks commence in Qatar, says the world is on a ‘trajectory for a global mean warming of well over 3°C’.

It predicts that even if emission reduction pledges made at the 2011 Cancun talks are kept there is a 20% chance of exceeding 4°C in 2100. Should these pledges be broken it suggests this will rise to 40%.

The report calls for the US$1 trillion of fossil fuel and other harmful subsidies to be invested into Natural Capital and low-carbon forms of energy.

It also suggests adaptation measures need to be increased. New buildings must be able to withstand extreme weather and urban public transport systems should be designed to minimize carbon emission and maximize access to jobs and services. 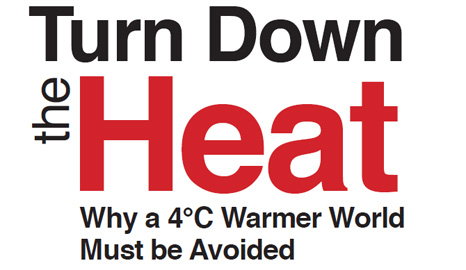 In a foreword World Bank President Jim Jong Kim writes that this latest research should increase the pressure on governments to make the transition to a low-carbon future.

“It is my hope that this report shocks us into action,” he said, adding: “This report is a stark reminder that climate change affects everything. The solutions don’t lie only in climate finance or climate projects. The solutions lie in effective risk management and ensuring all our work, all our thinking, is designed with the threat of a 4°C degree world in mind.

Based on research conducted by the Potsdam Institute for Climate Impact Research (PIK) and Climate Analytics, the report finds that a changing climate will result in rising sea levels, ocean acidification, heat extremes, the destruction of the Amazon and lower agricultural yields.

“There are indications that the greatest melt extent in the past 225 years has occurred in the last decade,” says the report.

In recent months the International Energy Agency (IEA) and global consultancy PwC have issued similar warnings. PwC said the world is on a trajectory to warm 6°C by 2100, while IEA chief economist Fatih Birol said the world could lose the chance of avoiding a 2°C rise by 2017 if investment in low-carbon investments is not increased.

It also suggests increases of 6° C or more in average monthly summer temperatures would be expected in the Mediterranean, North Africa, Middle East and parts of the United States.

At the 2011 round of UN talks nearly 200 countries agreed to work towards a binding global climate deal by 2015 that would come into effect in 2020. This year’s COP18 talks in Doha are expected to see an extension to the Kyoto Protocol adopted, but this will only cover 15% of global emisisons at best.