Poland’s Environment Minister has rubbished the idea that Europe is a leader on climate action less than two weeks before the next round of UN talks begin in Doha.

In a speech at the Polish Embassy in London, Martin Korolec said that the EU’s progress on climate change is not as impressive as it likes to think and that it is being overtaken geopolitically by major players in Asia.

“If you look at the emissions that the Kyoto Protocol has cut in Europe, it is around 200m tonnes of CO2 a year, and we are leaders? In the US, which has half the population, they have reductions from the switch to shale gas of 500m tonnes a year. We have a tendency to say we are leaders, but we are not,” said Korolec. 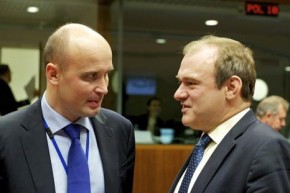 “We have some good ideas in the EU, but the centre of global gravity is moving from somewhere in the Atlantic to the Pacific. If you look at the figures on trade, we are not in front,” said Korolec.

The timing of Korolec’s comments may surprise some of his EU colleagues – notably Climate Commissioner Connie Hedegaard, who has been championing EU efforts over the past months.

He led the European delegation at the 2011 COP17 climate summit, where the basis of a binding global emissions deal was agreed, a result that was presented as a victory for EU collective strength.

Speaking to RTCC yesterday, UN climate change chief Christiana Figueres said the EU had been a “staunch supporter” of the process so far.

“It is very clear that the EU as a whole has traditionally been leader in the fight against climate change,” she said.

“They were also leaders in saying very clearly that they were committed to a second commitment period of the Kyoto Protocol. They have said that because it’s important to them. The Kyoto Protocol continues to be the mark of leadership from industrialised nations,” she added.

The EU’s ongoing commitment to Kyoto is taken as a minimum expectation from the talks – and Korolec’s comments can be seen as part of a wider debate within the bloc on how ambitious future emission cuts should be.

Poland has already been part of a disagreement with other EU nations regarding what should happen to its emissions allowances (AAUs) left over from the first period of the Kyoto Protocol.

Poland exceeded its 6% target compared to 1990 levels, achieving cuts of 30%. Part of this is due to changes in the country’s economy. Critics argue that these emissions reductions – which are sometimes referred to as hot air – would have happened anyway, so they don’t represent an additional effort to reduce greenhouse gases.

“There’s a difference in the language that I would choose to use. They are not surplus, they are not hot air. Poland, just like the UK, met its objectives under Kyoto. This is a hard fact, these reductions took place. It is not hot air, it is a reduction,” insisted Korolec. “We acquired the right to those allowances and all we want is to keep them.”

Poland successfully defended this right at a recent European Council meeting courtesy of backing from several other Eastern European nations. After the meeting, an unnamed EU insider described the emergence of an “east-west divide“.

“We are selling those credits and we have strict legislation that states that these revenues can only be invested in climate related projects. That means when we make a reduction and invest the money in such a project we can double the reduction. So it’s not hot air, it’s cold air…it’s freezing.”

Poland relies on coal for 93% of its electricity, a unique position among its EU peers, and one that Korolec says makes it difficult for the country to “find common ground” with its EU partners.

The country is reluctant to swap its domestic coal power for foreign gas in the short term, despite acknowledging the benefits this has had elsewhere.

“Let me put this more bluntly,” said Korolec, “a rapid switch would cause a national security concern as we would be dependent on Russia for gas supply.”

The Minister is a vocal supporter of Poland’s potential shale gas exploration as one route to replace its use of coal without sacrificing its energy security. Poland will open a Liquefied Natural Gas (LNG) terminal in 2014 that will allow it to import Qatari gas.

Korolec also bemoaned the lack of participation in the second commitment phase of the Kyoto Protocol which looks increasingly likely to involve only Australia and the EU, and said the country was keen to negotiate a deal that included “so-called developing countries like Brazil and South Korea…we won’t solve the climate issue without them”.

RTCC Video: Christiana Figueres talks to RTCC on her expectations for the Doha negotiations