The United Nations climate chief has called on China’s new leadership to ensure the country remains committed to a low-carbon future and engaged in the next round of negotiations later this month.

Mr Xi takes charge at a critical time for the climate, with some analysts suggesting the world has just under five years to avoid an irreversible 2°C temperature rise. In 2011 China was responsible for 29% of global carbon emissions, leading the United States (16%) and the European Union (11%). 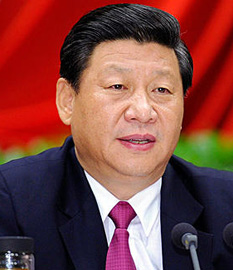 Xi Jinping was appointed on Thursday morning, and will run China for the next decade

In his acceptance speech earlier today Xi said a target of his government would be to create a “more beautiful environment”. The country’s latest Five Year Plan set a carbon-intensity reduction target of 17% and aims to generate 11.4% of electricity from renewable sources by 2015.

China has refused to accept any limits on its emissions at the international climate talks, citing its status as a developing country, but Figueres argues that its domestic policies demonstrate the ruling elite are focused on a transition to a low-carbon economy.

“It’s absolutely critical, because China is the largest developing country economy, it’s moving very quickly into first place on carbon emissions, but also because of the credibility and authority that China is in the world,” she said.

“I’m actually delighted to have heard in the past few days that China has increased its target and is considering generating 30% of its electricity production from renewable energy by 2015.

Observers, such as the former UNFCCC executive secretary Michael Zammit Cutajar, believe China and the USA hold the key to a binding global climate deal, given their combined emissions and ability to influence smaller states.

And while change in China may not herald a dramatic drop in its emissions, Figueres hopes that stability in Washington could lead to more engagement from the USA over the next four years.

“The United States now has the opportunity with a clear political mandate, because we all heard President Obama’s acceptance speech that he’s not willing to look at a future threatened by increasing global temperatures.

“So they do have the opportunity to use everything that they already have in place, to take it one step further at the domestic level and at the international level to strengthen their participation both with their support for developing countries and what they are doing as well as increase their leadership to ensure that governments will take on a universal agreement in 2015.”

Key issues at the Doha round of the international climate talks include a proposed extension to the Kyoto Protocol, a roadmap for a legally binding climate deal in 2015 as well as more immediate concerns over climate finance for developing countries.