40 million people at high risk from climate change in China

Xi Jinping was confirmed today as China’s new premier for the next decade. He will gradually take over power in the next few months, with Hu Jintao’s presidency coming to an end in March 2013.

Maplecroft says the next 10 years could see China face increasing environmental pressures. For example water stress in the country could be exacerbated as the needs of industry and agriculture compete with those of expanding populations.

This could particularly hit companies using the country as a manufacturing base, and Maplecroft warns that water intensive industries may find their ability to operate effectively in China restricted.

“As global corporations expand into the emerging growth markets, their operations and supply chains will become exposed to a complex set of climate risks that have the potential to disrupt business continuity,” said Helen Hodge, Maplecroft’s Head of Maps and Indices. “It is essential for them to identify where suppliers, assets and personnel are most at risk and plan for the long term.” 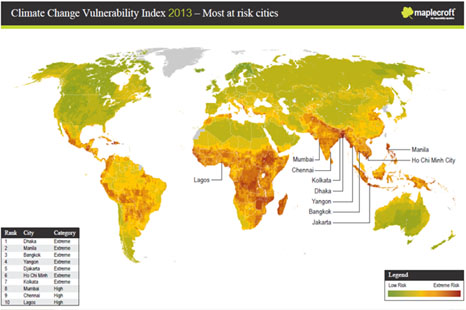 Maplecroft’s Climate Change Vulnerability Index identifies 50 cities based on their current and future importance for global business, and rates them on the risks to populations, company operations, supply chains and investment.

Multi-national companies operating in many Asian cities could be faced with environmental risks in coming years, according to the Index

Dhaka, Manila, Bangkok, Yangon in Myanmar, Jakarta in Indonesia, Ho Chi Minh City in Vietnam and Kolkata in India are all rated as at ‘extreme risk’.

Maplecroft warns these seven cities will be the most at risk from changing temperatures and weather brought on by climate change.

The results are not only based on how at risk a city is from climate change but also how resilient it is. The sensitivity of populations and the poor capacity of governments to support local adaptation measures and combat the impact of climate change will also make cities more vulnerable.

New York, which was hit with Superstorm Sandy this month, continues to rank 41 of the 50 cities by the Index – rated at ‘medium risk’. This is down to its ability to adapt to such events, says Maplecroft.

The USA’s strong economy and infrastructure, coupled with extensive preparations before the storm meant the city was able to return to business-as-usual soon after it was hit. It took just two days for the New York Stock Exchange to re-open.

Cuba and Haiti, which were also hit by the storm, took much longer to recover.