The new kids on the block of the green movement, the Arab Youth Climate Movement (AYCM) are already making an impact.

Formed just a month ago and officially launched last weekend with a Day of Action the group have already been described, by Kelly Rigg, Director of the Global Coalition for Climate Action (GCCA) as a sign of “hope” for the climate movement.

They also received huge support across the world, in the media and on Twitter, ahead of and during their Day of Action.

The launch saw groups of young people from across the region come together with one simple message – ‘Arabs time to lead’.

Events involved debates and education sessions in Oman and Bahrain, a fun day in the UAE, Twitter discussions in Saudi Arabia, a graffiti jigsaw in Lebanon, street parties in Jordon and marches in Palestine and Egypt. 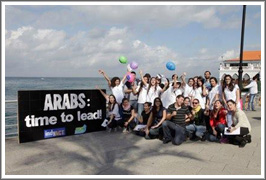 As part of the RTCC youth profile series I talked to Mostafa Medhat, AYCM regional co-ordinator in Egypt about why it was so important to create an Arab youth group ahead of this year’s COP18 conference in Doha, Qatar.

What is your group doing and what areas of work do you focus on?

We established the coalition in Egypt last month. It was launched at this time because the next COP will be hosted by Qatar. Everybody knows that the Arab countries, especially the youth, are not that interested in the environment and climate change. In the last two years we had the Arab Spring revolutions where young people and all the citizens in our countries were only focusing on the political issues not on the environmental issues.

We just wanted to let young people know about the environment and climate change and global warming issues and how we can contribute to help solve it. This was one of the targets of creating this coalition.

Regarding the next COP, we have been organising a Day of Action in all the member’s Arab countries. This is the first activity for AYCM and we planned it to happen in the same time and call for the same thing – ‘Arabs time to lead’.

We did this to let the world know that AYCM is here, and to let our governments know about our existence, and that there are young Arabs who care for the environment and are fighting to solve the climate crises. We will also lobby governments to stay on the right track.

We are still recruiting people and aim to have a coordinator in each of the Arab countries. 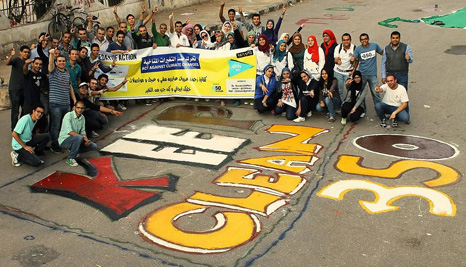 Day of climate Action in Egypt launched at by drawing art and graffiti in the street (Source: AYCM/Flickr)

We had a lot of applications. Even when we first announced that we wanted to launch the AYCM we received more than 500 applications. This is something that I didn’t expect from a region with no interest in environmental issues but it seems like I was wrong. They are proving the opposite.

After we held our launch workshop we started to contact those who had already applied to be part of the AYCM. These people are already part of NGOs and youth groups and have contacts. They each had at least 20 more people who were impressed and wanted to join.

A lot of countries like Bahrain and the UAE and also Morocco already had groups. The people who are coordinating there are representing strong NGOs and they were able to recruit people. 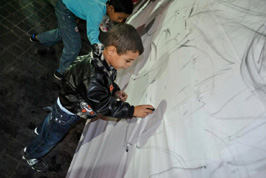 That is how we started our recruitment, by asking the applicants to recruit people from their universities, schools, neighbourhoods and their relatives.

We have large numbers. For example in Egypt we had more than 300 people join in 10 days. This was amazing. And we hadn’t even done anything yet. After the Day of Action I think we will reach 1000 or 2000 in one month.

I do not have an exact number for now as we are growing too fast but according to Facebook we have around 1300 people involved and this number is increasing.

As you can see right now there are still some security and political issues in the region. For example, if we organised a peaceful protest saying we are supporting Qatar and it is time for Arabs to lead on climate change, in our countries this would be considered as violence by some people.

Any protest or any activity in public that will grab attention will be considered as a revolution. Some people here think that protesting is not helpful in the current transition period. This is a major problem that we are facing right now.

We had a tiny problem with the Day of Action dates as Muslims where celebrating Eid al Adha on the previously announced date, but we were able to change the dates so everyone could get involved.

So far we have not had any other problems. 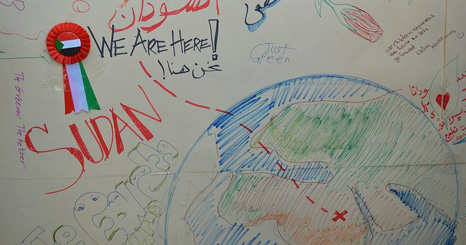 What I see is that a lot of coalitions were waiting for us to launch.

The UKYCC and also networks like GCCA and Climate Action Network (CAN) and Speak Your Mind in Australia; a lot of people have been contacting us and saying they are counting on us and that it is time to cooperate to solve this issue and that the AYCM has given them hope.

We have had a lot of support from all the parts of the world. We also had a lot of media attention for our day of action and even for the preparations for it with some help from GCCA, the Guardian and the COP18 official website. Our activities also got wide national media coverage.

In Egypt, 66% of the agricultural land is based on the delta area. The delta area is near to the Mediterranean. After 150 or 200 years of global warming and climate change impacts, this area will be underwater.

The population in Egypt is growing very fast. This plus the loss of 60% of our agricultural land will not be good. We already have some problems with the Nile. Some countries are building dams on the Nile so this will reduce the amount of water in Egypt. You can imagine, less water, less agricultural land; more people will be left poor. It will be a disaster.

Who knows what else could happen.

What would be your vision for 2050? How do you think we get there?

AYCM has not yet agreed on our action plan for the next 10 years. What I think is that every country has to start to raise their ambition and not wait for the biggest countries to help them out. The problem will be solved if we do not wait for help and if we all already had a plan. If each country starts on its own, one way or another, or in partnership with another country, the problem will be solved much sooner.

This is a start.

Egypt at the negotiation table, is fighting for the right to develop. I think they are right but if you want to fight for your country to be developed you also need to use green technologies, and stop generating power via natural gas and by burning fossil fuels.

My point is that I want countries like Egypt to say yes we will evolve and develop but we will also change the technology we are already using to develop our country.

So we can, for example, stop generating electricity from natural gas and use solar power. Egypt has a lot of deserts and we can use that. Also we can use solar cells in all the Sahara regions in Africa and export the energy to countries that are still using fossil fuels to generate electricity.

I think if we started projects like this it would start to help develop countries like Egypt and Libya and it would also help to cut the emissions. If that started now, in 2050, I think that we have started to solve this global warming issue and cut our emissions.

What would help your group to move forward in its work?

First of all we need financial support; this is the first thing. For example, I am still not sure if I am going to the COP because we are still looking for funds. Financial support will help us a lot in our activities, for example our outreach and organising workshops in each country every year, twice a year to recruit people.

If we get support from UNEP this will help us expand our outreach to the government. For example our governments can take representatives from AYCM to the COP meetings.

Also we need support from stronger NGOs and to build a strong network that will help us to cooperate with other NGOs who are working on the same issues around the world.

Why did you get involved in the group? What do you think youth groups bring to the debate?

I have been working with NGOs for the last nine years and four of those years were specifically working on environment and climate change. I started on awareness campaigns to let people know about global warming and biodiversity, and water and air pollution.

When I had the opportunity to be part of the IndyAct delegation in Durban last year, at the last COP, I was really not aware of what was happening during these conferences and how big the issue is. 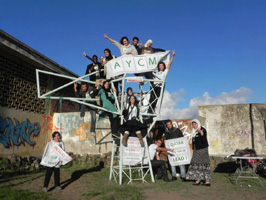 I was just telling people that there is a big issue we need to work on solving it. I did not know that the negotiations were so technical and financial and how related they are to the political position of every country.

When I knew that the countries and the governments were negotiating on climate change using experts from fields like aviation and others not related to the environment I realised this was making the negotiations more time consuming.

It is more political and economical than environmental during the negotiations.

I want to put the government on the right track. We need to negotiate and discuss climate change and not how to get money or have a strong political position.

I am just trying to help and let people know so we can unify our voice and let our governments know we need a change and not just negotiating on political and economical issues.

I want to unify the voice to lobby on the government.

I always say that if everybody cooperated with the other parties and if we unified our voice as global citizens and not an Egyptian or Lebanese or English or Americans, if all the future leaders unified their voices and lobbied on the government this will put the negotiators in the position where they must obey our demands.