Survey shows 77% of Americans think climate change is a priority

Climate change should be made a priority for the President and for Congress according to 77% of Americans in a new poll.

The survey by Yale Project on Climate Change Communication also unearthed resounding support for clean energy with 92% of those asked saying it should be a very high (31%), high (38%) or medium priority (23%) for both Congress and the President. 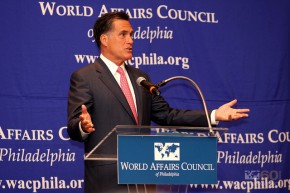 Would the Romney-Ryan Election campaign have chosen a different line in climate change armed with this polling data? (Source: World Affairs Council of Philadelphia)

The interviews were carried out between August 31 and September 12, two months before the US election and Hurricane Sandy, which was credited with bringing climate change back into the political debate days before the polls opened.

Both candidates had been silent on climate issues prior to the Hurricane.

National climate change policies have struggled to gain traction in Washington with the Republican Party, which controls Congress, deeply hostile to climate action.

Despite calls for the election’s winner Barack Obama to push climate change up the agenda, no great shift is anticipated at the next round of UN climate change talks in Doha.