President George W. Bush said the US had a fossil fuel addiction. Now it seems the country has effectively become its own dealer with a surge not only in gas production but oil too.

There are so many new developments they are hard to keep track of. Oil sands in Utah, shale gas right across the states, deep sea wells off the coast of California, Alaska and in the Gulf of Mexico. Who knew North Dakota is now producing 600,000 barrels of oil a day. That’s about the same as Egypt.

The International Energy Agency (IEA) predicts that in 2015 the US will overtake Russia as the world’s largest gas producer. In 2017 it will overtake Saudi Arabia as the largest oil producer.

Looking at those statistics, Mitt Romney’s election promise to have the US energy independent by 2020 seems almost unambitious. However, demand in the US is high, and independence, despite these massive resources, is more likely closer to 2035. 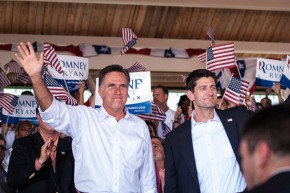 The Romney/Ryan campaign pledged energy independence for the US but IEA data suggests it is more or less headed there anyway. (Source:Flickr/Monkeyz Uncle)

“We don’t believe any country can be independent but you can be self-sufficient,” says the IEA’s Deputy Executive Director Richard H. Jones.

“We have seen, very dramatically, that even though the US is self-sufficient on gas and US prices are moving in a different direction [to the rest of the world], there’s still dependency.”

Gas prices in Asia are now eight times those of the US and European rates are around five times the level off the US.

So how does this US dash for gas feed back into the climate?

While the US is enjoying its gas boom, it has stopped burning rather a lot of its own coal. Given that gas is a cleaner fuel than coal, the result was a drop in electricity-related CO2 emissions of 2.4%.

On the face of it, this is great news for the climate. But the displaced coal found a new home.

“Gas has out-competed coal in the electricity generation market, so US emissions are dropping because of that but the US coal isn’t staying in the ground. It is still being mined, but it’s being exported to Europe. It is cheaper than gas on the other side of the Atlantic. So all of a sudden you’re getting more coal fired generation in Europe,” says Jones.

In the same month that the US announced its cut of electricity related emissions, Germany was announcing an increase of 2-6%, even though demand fell 9% courtesy of a mild winter.

Germany’s decision to walk away from Nuclear power means it is increasingly relying on coal, and it is not the only one.

So in effect, the savings in US emissions were loaded onto the back of a boat and exported onto Europe’s tab.

The story doesn’t end there however.

Russia, a major gas supplier to Europe has recognised the threat from cheap coal and has begun lowering its prices. This is making gas more competitive and dislodging coal’s grip.

Coal enjoyed it biggest share of the world market for 50 years in 2011. In Europe at least, the IEA sees this remaining the case until at least 2020. Perhaps then, gas will dislodge coal in Western Europe. If history repeats itself however and that displaced coal is sent east to meet the growing demands of China and India, the net result for the climate will be zero.

The race towards energy self-sufficiency cannot be attributed entirely to these new resources however and it is this second major factor towards the US’s energy independence that holds the real benefits for the climate too.

Birol claims that around 55% of the country’s surge towards this status has been as a result of the new found domestic energy riches but 45% is as a result of the energy efficiency standards introduced by the first Obama administration.

This is a huge endorsement for energy efficiency, another theme running throughout the World Energy Outlook.

Energy efficiency as a fuel

With emissions rising outside the US in the short term due to coal’s resurgence, those with existing emissions targets, such as the EU, must do what they can to cut emissions elsewhere. There is a compelling case for reducing demand.

“Energy efficiency is like a fuel, it is the ‘hidden fuel’ and it is not a big project for governments, it is millions of small projects. It’s money from individuals, companies and governments and we believe these are the type of measures that can be carried out without waiting for an international deal on climate change at the UN.”

Talks on a global deal to create a system for all countries to make binding emissions reductions will continue in Doha at the end of this month. The current timetable is to agree the rules by 2015 and for commitments to begin from 2020.

“We’re trying to think of a strategy for the interim and this is a good one,” says Jones. “Governments can help without spending any money. They can mandate [sustainability] reporting, mandate [energy efficiency] labelling and relax building codes.”

Jones gives the example of a German apartment block owner who was permitted to add an additional floor to his building in return for investing in energy efficiency in all his tenant’s flats. His rental income grew by 20% and the residents bills fell by 87%.

At present, around one third of the potential energy savings from efficiency measures are being exploited.

The lesson from the US is a surprising one. Following the mantra “drill, baby drill” is not enough by itself to achieve energy self-sufficiency and it does little for the climate.

With an increasingly complex outlook for international gas trade flows, the imposition of a global cap on carbon emissions and a shift in the centre of gravity of the world’s energy suppliers, the case for energy efficiency just keeps getting stronger.

“It’s good for the economy, good for the climate and good for energy security, energy efficiency scores highly on all three,” says Jones.