EU negotiating with “a gun on the table” on aviation emissions

The Asia Pacific Airlines Association have accused the the EU of negotiating “with a gun on the table” following the bloc’s decision to suspend the inclusion of international aviation from its regional emissions trading platform.

European Climate Action Commissioner Connie Hedegaard announced yesterday that the inclusion of flights to or from countries outside Europe, would not be included in the scheme for a year.

Work will continue on a global agreement on emissions through the International Civil Aviation Organisation (ICAO) in the meantime. 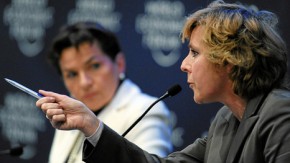 “If this exercise ends in nothing we are back to where we are today in the EU Emissions Trading Scheme (ETS) and we are back there automatically,” said Hedegaard.

Airlines from India, Russia, China and the US had opposed their inclusion in the EU ETS with legal action under way and warnings of a trade dispute sounded.

“The implied threat of an automatic snapback in a year’s time means that the EU will still be seen by some as negotiating with a gun on the table,” said Andrew Herdman, director general of the Asia Pacific Airlines Association adding that the freeze was “long overdue”.

Meanwhile, Qatar Airways CEO Akbar Al Baker said the EU had “goofed” on its decision to include aviation from all countries in its own regional emissions scheme.

“I know that maybe the EU is trying to backtrack and they realised they have goofed on this matter. This is a face saving way to say they are going to delay,” Al Baker told Arabian Business.

“I think the delay will be very prolonged and it was a bold and very wise decision, as it is going to be a real problem in their hands to resolve this decision with major countries who have rejected complying with this requirement,” he added.

Environmental NGO WWF was more welcoming of the announcement saying that the responsibility now lies with nations negotiating through ICAO to find a deal.

“The Commission’s move on aviation in the ETS buys some time for ICAO, who were arguably galvanised into action by the EU in the first place after years of foot-dragging on this issue,” said Jason Anderson, head of European climate and energy policy, WWF European Policy Office.

“Now it’s up to other countries who have been opposing action on tackling the climate impacts of aviation, especially the United States, to show that they are serious about pushing for a global solution,” said Anderson.