President Obama can now establish a strong leadership position at the UN climate change negotiations, according to the talks’ chief Christiana Figueres. 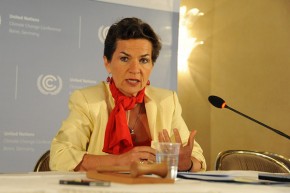 UN climate chief Christiana Figueres says now is the time for the US to display climate change leadership. (Source: Flickr/UNFCCC)

Speaking to BusinessGreen, Figueres said the continuity provided by Obama’s win meant the country could make a significant contribution the negotiations next meeting in Qatar at the end of the month.

“The US has the opportunity to contribute to the very important outcomes needed at Doha and show the leadership that comes with the type of economy and size of economy that the United States is,” said Figueres.

The US has long stressed that it would not sign up to internationally binding emissions reductions until other major economies, particularly China, did the same.

China and other emerging economies maintained that with little historical responsibility for greenhouse gas emissions, the burden should lie elsewhere.

Last year’s talks in Durban saw all countries, including the US and China, agree to start negotiations on a new deal on emissions reductions for all, to be agreed by 2015, with cuts starting in 2020.

“Governments have been working very hard and seriously over the last 11 months to prepare for the decisions that they will take in Doha,” she said. “I have no evidence other than commitment both to hard work and finding a common ground for agreement.”

The Doha talks will also establish a second commitment period of the Kyoto Protocol, which applies only to developed nations.

VIDEO: Huhne and Figueres vent frustration with US position at COP17