Indigenous communities are both victims of climate change and agents of change.

Compromising just 4% of the world’s population, they use 22% of its land surface and maintain 80% of its biodiversity in or adjacent to 85% of Earth’s protected areas.

The land used by indigenous communities also contains hundreds of gigatonnes of carbon.

The communities are great observers of the natural environment and interpreters of the changes to it. More and more their role in the fight against climate change is being acknowledged.

In 2007, the UN General Assembly adopted a resolution entitled the ‘Declaration on the Rights of Indigenous Peoples’, highlighting the role of communities in decision making processes.

But still today, the voice of indigenous communities remains small.

One group of young scientists from across Africa aims to strengthen this voice. They want to use research and information to highlight the important role these communities have to play across the continent. 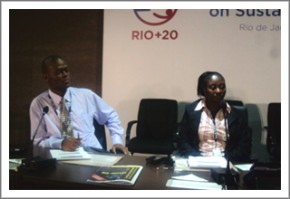 As part of RTCC’s youth profile series I spoke to Thabit Jacob, a student from Tanzania and chair of the African Young Scientists Initiative on Climate Change and Indigenous Knowledge Systems (AYSICCIKS) about how indigenous knowledge can compliment modern science and help tackle climate change.

What is your group doing and what areas of work do you focus on?

Our group is working to empower young African scientists and youth to effectively respond to climate change in their countries and communities.

For centuries Africans have been naturally adapting to and mitigating climate change through their own way of doing things and we feel this knowledge should be used.

We do a lot of research, information dissemination and community engagement and outreach. Basically we are trying to work with young people from across different African universities and also youth who are not involved in education.

In 2011 we were able to bring together more than 65 young scientists in Johannesburg in South Africa to share the  findings of their research.

One of the things is that we have really been able to do is mobilise young people, young scientists from across vast parts of the continent, to highlight and strengthen the role of indigenous knowledge through research.

This is very important. We have a lot of young people in advocacy and campaigning but very few young people are actually doing research that is informing climate change policy and their own communities’ considerations. This is one of our main results.

We have created a real interest among African youth to engage in the fight against climate change, we are creating an interest in this among young people.

Back in December last year we organised a side event during the COP17 UN climate talks in Durban. The whole idea was to have a round-table for young people to discuss the way forward from an African perspective and the role of indigenous knowledge on climate change.

This year a few of us were also able to attend the Rio+20 meeting and do another side event very much with the same message, trying to showcase the work that young African scientists are doing to be part of the climate change solution.

Right now we are working on how we can also be part of COP18 in Qatar. We are trying to reach as many young Africans from different universities as possible, to see if we can cooperate in Doha and mobilise more research findings from different young people.

One of the other things that we also started last year was a database of African scientists and youth involved in climate change to facilitate network building. When we are talking about indigenous knowledge, this knowledge is actually held by the older generation. Last year we set it up a meeting so that the elders and the young people could share their ideas.

Africans, particularly the older generations, believe in different methods. So for the first time we were able to bring young people and these knowledge holders together to try to learn from each other and that was really interesting.

The group brought African scientists and youth from across Africa together in Johannesburg to share their ideas and research (Source: AYSICCIK)

The one thing which we think is still a challenge for all of us is not having enough experience. I am a young person myself and this whole group is all about young people and most of us are not particularly experienced. We can not call ourselves experienced so we really need the membership of people who have had much more experience in climate change research.

I think this is something which is really a problem, we need to have more experienced researchers to work with and that would be really brilliant. This is one of the issues we see as a challenge right now.

Another challenge is working with young people from different countries across the continent. Being able to connect can be time and resource intensive.

The whole initiative is based out of South Africa and being able to get around and contact people across Africa can be expensive and time consuming. Our funding is not huge. I am not paid, I am just doing this out of passion.

We are trying to reach as many young Africans as possible so we created a social network for the group, a Facebook page. But this has not been as effective as we anticipated as African communities are limited because the connectivity is different in different parts of the continent. As a whole it is still not very connected. So this is another issue we have been having.

What support have you had for your activities?

Our initiative has seen a lot of support from government and multilateral organisations. Last year we received massive support from the department of science and technology of the government of South Africa. They were able to provide us with funding and they are still very much a part of the initiative.

And also we look at the New Partnership for African Development; they have also been very supportive of our initiative. We have seen a lot of support right now, especially from governments.

What are the impacts you are seeing in your country from climate change?

I think it is important to note that we are seeing a lot of climate variability in Tanzania – you cannot really call it entirely climate change. We are seeing different weather parameters.

Drought is one of the things we are experiencing. At the end of 2005 and 2006 there was a severe drought that led to the decrease in agricultural production. People have been having trouble with rising food prices.

We can also talk about increasing frequency of foods. We have seen flood incidences increasing, which is impacting local infrastructure, homes and crops.

In my country we rely very much on hydro-power and the variability of rainfall affects our ability to provide energy. Two years back the whole country was having black-outs for a day or two at a time.

But also we are seeing temperatures slightly increasing. This was something we didn’t have 20 years back. This has created favourable conditions for mosquitoes and malaria. 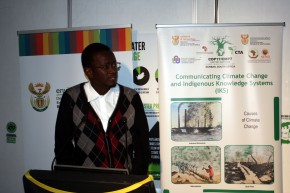 Our vision is very clear. We want to see that indigenous knowledge is firmly at the centre of our governments’ interventions on climate change adaptation and mitigation.

The group also supports the move to low carbon growth and also finally we need to see urgency in the global efforts and more political will to fight climate change and more youth engagement, as we are one of the most vulnerable groups when it comes to this issue.

We are working on a programme to have the voice of young people at COP18. We are trying to do this is by sharing solutions on climate change problems. These solutions reflect the collaborative research conducted by our members from different parts of the continent.

But also the initiative for COP18 is based on the fact there are so many issues from COP17 – especially on climate change finance, the issue of the Green Climate Fund – and these are issues which very much affect Africa, we need to see some progress at COP18.

What would help your group to move forward in its work?

We need to reach out to as many young scientists and young people in Africa as possible. In this regard financial assistance will be vital.

We also need to ensure that young scientists are mentored by much more experienced researchers.

Why did you get involved in the group? What do you think youth groups’ role is in the climate/environmental agenda?

I got involved in this group because I believe climate change is one of the most critical global challenges of our time. I also believe young African scientists and youth in general can play a crucial role in raising awareness about climate change through research, dissemination and outreach programmes.

Youth in Africa have played a crucial role in various socio-economic activities but their contributions have always been undermined and their capacities are being underestimated due to poor information sharing. Our initiative is doing its best to give young African scientists a voice to share their contribution in addressing the problem of climate change

Youth groups can play various roles in the climate agenda as activists, researchers and peer-to-peer debates on climate change.