Let’s not get carried away. Barack Obama’s return to the US Presidency means it is business as usual for the climate.

Currently this means we are on a pathway to 6°C, and while Obama says and tweets the right things, there is precious little in substantial policy proposals coming from the White House. 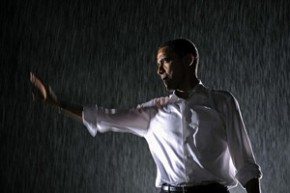 There’s plenty of advice around for President Obama on how to deal with climate change in his second term. (Source: Flickr/Oporder)

It’s true that US emissions for the first quarter of 2012 were the lowest for two decades – but this was largely due to the exploitation of its shale gas reserves – so not indicative of a radical change in mindset.

The US currently accounts for 16% of global emissions. This is far below China on 29% but significantly above the EU on 11% and India on 6%.

More importantly, no major climate deal will work unless the USA is on board and demonstrating leadership and committing to a low carbon economy.

Here’s what commentators from across the globe would like to see in terms of climate leadership over the next four years.

Peter Aldhous, New Scientist: Passing new laws to cut greenhouse gas emissions remains unlikely, with the House of Representatives still controlled by a Republican majority dominated by climate change sceptics. But Obama has a few key policy levers at his disposal via existing laws – and in his second, and final, term may be less wary of using them.

His best hope is the 1970 Clean Air Act . Two landmark Supreme Court rulings, in 2007 and 2011, established that it gives the federal Environmental Protection Agency (EPA) the power to regulate greenhouse gases.

Damian Carrington, Guardian: International efforts to tackle climate change have fallen so far due to a lack of trust on all sides: why should we cut our emissions if we’re not sure you are going to do the same? The way to build that trust is by showing action on the ground at home. A US carbon tax has been talked about as an alternative to the cap-and-trade bill, but there seems next to no prospect of this overcoming Republican opposition.

Re-elected Pres Obama wants a future that “isn’t threatened by the destructive power of a warming planet” wapo.st/Qnrvlu

Tom Zeller Jr, Huffington Post: Given the inability to move legislation through a gridlocked Congress, much of what the president has cared about environmentally over the last four years has been pursued, as a matter of necessity, through regulation — typically through the Environmental Protection Agency. The odds are this trend will continue.

Kevin Bullis, MIT Review: Obama should reverse the course his administration has taken in the last couple of years, talking little about climate change, and only confusing the issue with talk of green jobs and oil independence which have little or nothing to do with addressing climate. One of the most important steps Obama can take in the next four years is to make climate change the focus of an intense, high level, national debate.

Tom Chivers, Daily Telegraph: Rightly or wrongly, Tropical Storm Sandy brought it to the forefront of people’s minds. Allen West, the furiously climate-sceptic Florida Republican, has been voted out; Barack Obama mentioned it in his victory speech, for almost the first time since the start of the campaign. Maybe an Obama presidency with no concern over reelection in four years might be able to shine a light on the issue at last.

Tom Mitchell, ODI: Current commitments to ‘fast-start’ climate finance for developing countries run out in December 2012. The next target is US$100bn per year by 2020, but there is no indication of what might happen in between. The President could transform this conversation by committing the US to bold spending from public sources on international climate finance up to the end of his administration. He should also say that much of this money will flow through the Green Climate Fund when it is ready to start spending, and reassure us that a good proportion of this spending will be in addition to overseas development aid. That would be likely to spark a major European rethink on its level of climate finance and the relationship between climate finance and aid.

#Sandy was a climate change warning #Obama must now take the stage and fulfill the promise of hope the world needs. — Kumi Naidoo (@kuminaidoo) November 7, 2012

Joe Romm, Think Progress: He needs to become a climate hawk. He needs to reverse his two biggest blunders. First, and easiest, he must use the bully pulpit to inform the public of how climate change is already impacting us now, of what’s to come if we keep on our current path, and of the myriad cost-effective solutions available today. Second, Obama has to lead the nation to carbon pollution reductions of at least 17% versus 2005 levels — his Copenhagen commitment — so he can then lead the world toward a global deal. This may not be sufficient to avoid catastrophe, but it is necessary.

Bright point: James Inhofe will not be running the Senate Environment Cmte.

Mindy S. Lubber, CERES: In the wake of the 2012 election, Ceres is eager to work with President Obama to move America toward a more sustainable economy.

Specifically, Ceres calls on President Obama and Congress to expand clean energy with the goal of 20% renewable energy by 2020 and 30% by 2030; reduce greenhouse gas emissions to levels that avoid the worst impacts of climate change and build the resilience of our communities as they prepare for more pronounced extreme weather, such as last week’s devastating Hurricane Sandy.