Some US election commentators are amazed that two candidates with such different proposals for the future of their country are running so close together in the polls.

On its own that says something about the political polarisation that currently afflicts America.

But when you look at certain policy areas, it can be difficult to tell President Obama and Mitt Romney apart. The presidential debate on foreign policy was a little bit like a competition to see who agreed with the other the most.

On energy, Romney’s plan to exploit more domestic fossil fuels is more or less the same as Obama’s strategy, only on steroids. With ample shale gas and the promise of big oil hauls off its coasts, the US government’s preference for fossil fuels is a given for at least another 200 billion barrels. 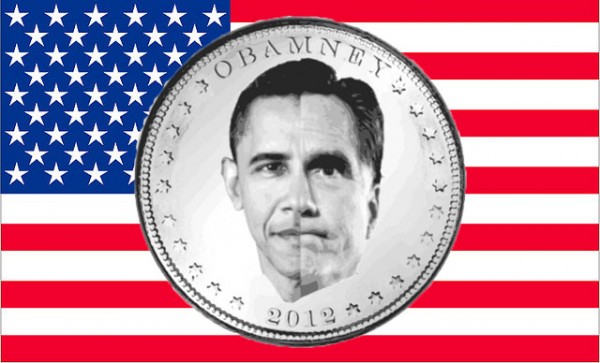 On many issues, Romney and Obama are two sides of the same coin. (Credit: Flickr/PosterBoyNYC/VDub144)

On climate change, the well-publicised silence was broken by the crash of Superstorm Sandy clattering into one of the most densely populated areas of the US.

Tom Steyer, labelled “the richest climate change champion in the US” offered another steroid-related analogy to explain extreme weather’s relation to climate change.

“The connection between extreme weather events and climate change is like that between steroids and home runs: you can’t tie any one home run to steroid usage, but the number and distance sure increase,” says Steyer.

The storm seems to have given Obama a mini-bump in the polls but nothing that stretches beyond the margin for error. It’s anyone’s race, but if you’re following the UN climate change negotiations, it doesn’t really matter who wins.

Why climate change was not ignored in the US Presidential debate

While America wrestles with the concept of climate change and its existence  evidence continues to amass suggesting we are headed for 6°C of warming. The IPCC recommends that we should stay below 2°C, a figure that has been adopted by policymakers.

The fragile UN talks need active participation from the US by 2015, the cut off point for a new global deal on emissions reductions. This will be on the next president’s watch and they will determine the extent of that involvement.

Obama’s negotiating team only allowed the deal agreed at the last UN climate summit to go through because it did not include the concept of Common But Differentiated Responsibility (CBDR). This “firewall” between rich and poor nations is designed to ensure the greatest actions to address climate change come from those with the largest responsibility for causing it.

Its inclusion in a future deal could prove to be a thorny issue. At an intermediary round of talks in Bonn this May, the States’ climate number two, Jonathan Pershing, was at pains to stress the country’s position on CBDR and that a deal with actions from all, rich and poor, was the only deal the US was interested in.

In the immediate future, Obama’s team will be at the impending talks in Doha regardless of the election result, even though they will be aware that their remit could run out in January.

Michael Zammit Cutajar, the first Executive Secretary of the UN Framework Convention on Climate Change (UNFCCC) believes that US inaction on climate change is a stance linked to the national mindset, not necessarily to any one Administration.

“The US position on climate change has morphed into a sub-plot of the US and China position on the geopolitical stage. The result is a tendency to stand-off. They do both have a shared preference to not tie their hands with international treaties imposed from the top down,” he said.

This is certainly true. State legislation, not federal, has driven much of the positive action to address climate change in the States. It has catapulted California into prominence for its work reducing transport emissions, promoting renewable energy and developing a state-wide cap and trade system.

Emissions trading has also been embraced by a coalition of states on the Eastern Seaboard but at a national level, it would struggle to pass through Congress without a major shift in public opinion.

That brings us back full circle to Superstorm Sandy.

The greater acceptance there is that extreme weather events and unpredictable rainy seasons are connected with climate variability, the more unacceptable inaction will become to voters.

The political weight of the droughts will perhaps not be felt until the consequences of poor harvests hit Western Supermarket prices. When it comes, the respsonse could be severe.

Insurance companies could also play a role in shifting US climate policy. Increasingly fed up with being forced to insure vulnerable homes and infrastructure within prescribed price constraints, they can exert considerable pressure on an Administration in denial. As experts in assessing risk, they want the Government to start factoring in climate change to. Major investors and (most) industry agree too.

Regardless of who wins on Tuesday, disgruntled consumers and big business have made the link between the shifting climate and a number extreme weather events, from Sandy to Colorado wildfires to the widespread drought. When consensus develops in these two groups and calls for climate action are mainstream, no US president will be able to ignore them. That’s change you can believe in.

Campaign promises are one thing, but once the votes are cast and the inauguration complete, those promises become far looser. The two candidates manifestos look remarkably similar on energy and both endorse similar degrees of inaction at the international climate talks.

Obama has spoken out on climate change repeatedly, “it is not a hoax” he bluntly stated in September.

So if both candidates pledge to do nothing on climate change, who is the greater sinner? The man who denies there is a problem in the first place, or the President who said climate change “will pose unacceptable risks to our security, our economies, and our planet”?