Proposals for the EU to adopt a more ambitious emissions reduction target of 30% at the UN climate change talks have been backed by the European Parliament’s environmental committee.

Europe’s current goal of 20% by 2020 has been deemed as insufficient to keep warming within the safe boundaries recommended by climate scientists.

“The EU and our global partners must keep their promises, but also increase their level of ambition if we are to limit global warming to 2°C. It’s time to move,” said Environment Committee Chair Matthias Groote. 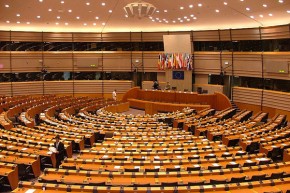 The European Parliament’s Environment committee has backed a strong stance from the EU at the climate change talks in Doha this month. (Source: Wikimedia/Azla)

The vote, won 54 against seven with one abstention, is the first clear public backing of a strong position from the EU at the Doha climate change talks.

Europe’s stance at the negotiations has been dogged by a split with Eastern European nations on what to do with emissions allowances from the first period of the Kyoto Protocol.

Poland has been joined by other carbon heavy economies in calling for left over Assigned Amount Units (AAUs) to be carried into a fresh round emission cuts under the Kyoto Protocol.

However, with so many spare credits, carrying them over would cancel out a chunk of the EU’s pledged emissions reduction, weakening the new phase of the Kyoto Protocol.

Environment Ministers met at a European Council meeting last month but were unable to resolve the matter.

Today’s vote cements the view that any new Kyoto period that includes carries over so-called “hot air” credits, will severely undermine the environmental integrity of the process. The resolution calls for Europe to “lead by example” on this issue.

The resolution also calls for caution in the on-going row over aviation emissions.

While it backs the inclusion of aviation, maritime and other sectors in the EU Emissions Trading Scheme (ETS), an amendment in the resolution “expresses strong doubts with regard to the retaliatory trade measures being taken by third countries such as the United States, China and India, which are showing that they do not want to be subject to EU legislation and are calling for an international agreement through the relevant institutions”.

The resolution also makes reference to protecting the EU’s competiveness in the green economy.

“…The investment programmes dedicated to energy transition in countries such as the China and South Korea and calls on the Commission to analyse such programmes and their implications for EU competitiveness in the sectors concerned,” it states.

China is investing heavily in energy efficiency and renewables with trade disputes in the solar sector already emerging.

The resolution with amendments as of October 12, 2012