The UN’s Clean Development Mechanism (CDM) is too “bureaucratic” and a “nightmare” to go through, according to a company involved in the scheme.

Sarah Collins, founder of Natural Balance told RTCC that the complexity of the application was a “nightmare of momentous proportions.” This week the UN employed contractors to clear a backlog of applications.

Natural Balance started the process of registering their Wonderbag biodegradable cooker with the CDM in 2008, but to date have been unable to sell any carbon credits through the scheme.

“It has been a nightmare. I think it was my ignorance and my naivety that I didn’t really understand it and just thought ‘oh it can be done’….It is a very complex process, the CDM bureaucratic system,” Collins said.

Four years is at the higher end of the waiting period. On average CDM projects take a year to go through the registration process.

The CDM allows countries with emissions reduction commitments under the Kyoto Protocol to offset their greenhouse gas output by paying for projects in the developing world, where deeper cuts can be achieved for less money.

But many companies have raised concerns that the system is slow, complicated and often expensive to be involved in.

A recent report from the Federation of Indian Chambers of Commerce and Industry, which surveyed businesses from across a range of sectors, found only one third of those projects approved at national level in India have to date been registered at the international level, under the UNFCCC.

It blamed this on a system it said was ‘clerically orientated’ with too much focus on perfect documentation. It also found the transaction costs of the CDM too high, making it unaffordable for smaller companies.

In September this year, a report from the High Level Panel of the CDM also called for a restructuring of the scheme to strengthen its governance and to make it more accountable and efficient.

The panel’s chair Joan MacNaughton said it had “essentially collapsed”, and talking to RTCC called on governments to demonstrate their commitment to its future.

The report also called on the scheme to give more countries access to its benefits and called on nations to increase their mitigation ambition. 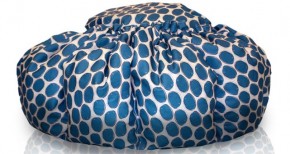 The Wonderbag aims to cut carbon, reduce air pollution in the homes and save low income households money (Source: Wonderbag.com)

The Wonderbag is a biodegradable bag made from recycled polyurethane. Food is transferred into the bag after boiling where it continues to cook for up to five hours without the need for extra heat.

It cuts the amount of time food has to be kept on open fires or paraffin stoves, reducing water and fuel use.

Natural Balance has already distributed over 700,000 of the stoves across South Africa and aims to have 100 million distributed across the African continent by 2015.

To ensure the bag can be sold at a price low income households can afford, the Natural Balance team looked for ways to subsidise it and in 2008 Collins began the process of accreditation and validation for a Programme of Activity (POAs) under the CDM.

POAs allow for a group of small projects to be registered under the umbrella of one – opening up the CDM process to activities which may be too small alone to be of commercial value.

Four years later and Natural Balance has still been unable to issue credits in South Africa, and has now turned its attention to Rwanda – where they have recently launched the Wonderbag – with the hope they will get more success there.

“More importantly what they are looking at is community development…the Wonderbag has had a massive impact on the bottom line of the consumer, we are putting more money in the back pocket of the consumer every month.”

The future of the CDM depends on whether a second commitment period of the Kyoto Protocol goes ahead. This will be decided at the COP18 climate summit in Doha later this month.

Meanwhile, the UNFCCC is working hard to ensure the mechanism gets back up to speed after a difficult few months – but for Collins, the jury is still out.

“I think they are moving,” she said. “I am certainly engaged at length with the UNFCCC with my experiences and advising and assisting and they are certainly looking for collaboration and input so I support the CDM.

“I think it has played a very significant role in monetising carbon and getting big shifts to happen in the world. I think it has been successful in what it set out to do. If you ask me whether it will be successful for adaptation projects; I have my reservations.”

The story of the Clean Development Mechanism in numbers